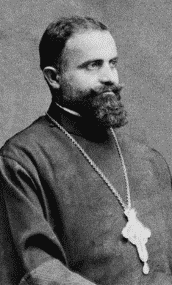 “Bishop Grigoris Balakian was a leading Primate of the Armenian Church in Europe, the author of his distinguished “Armenian Golgotha,” recently translated into English by his grandnephew Peter Balakian and Aris Sevag. Following his great uncle’s two volumes, Peter wrote The Burning Tigris: The Armenian Genocide and America’s Response (2004), and Black Dog of Fate (2009) both published by Barnes and Noble publishing house.

Graduate of the Armash Seminary

Following his graduation and ordination from the Seminary of Armash, near Constantinople in 1901, Bishop Grigoris Balakian lived an eventful and turbulent life during WWI and the Armenian genocide. He was sent to Germany where he received higher education and became fluent in German. The Seminary of Armash was distinguished with its illustrious Dean Archbishop Malachia Ormanian,    and Teacher Bishop Yeghishe Tourian. The Seminary had a short life, only 25 years (1889-1915), and was the victim of the Armenian persecutions by the Ottoman Empire.

Born in Tokat, and while serving in the Armenian Patriarchate briefly under Patriarch Malachia Ormanian,  Grigoris Balakian Vartabed was exiled in April 1915, together with Gomidas Vartabed and the leading Armenian intellectuals to Anatolia. They were exiled first to Changhere, and then on their way to Deir Zor, where most of Armenians were massacred and where later a chapel was built in their memory. Balakian managed to save himself and deviate to Islahieh through bribery and disguise as a German soldier, and return to the Patriarchate in Istanbul. In 1920 he was assigned Legate, and in 1925 was ordained a bishop by Catholicos Kevork V of All Armenians who assigned him his Legate in Europe, with his headquarters in Marseille, France, since there was already Bishop Vramshapuh Kibarian residing in Paris representing the Catholicos of All Armenians.

Bishop Balakian, fluent both in French and German languages, became a great asset. In 1921 he was called to Berlin as a witness while the Armenian hero Soghomon Tehlirian was being charged following his murder of Taleat Pasha in Germany. Taleat had given written orders all over Turkey to annihilate all Armenians during the holocaust, fearing their progressive advantages. Courageously Balakian Vartabed defended Tehlirian at the court and was able to rescue him. Tehlirian lived many more years as a national hero and passed away in Fresno, Caliifornia.

The good Bishop, still a Vartabed, was soon called by Catholicos Sahak Khabayan of Cilicia as a translator when the German warship Patcheh anchored in Mersin, Cilicia, to help Armenians through an interview with Catholicos Sahag Khabayan of Cilicia during the ongoing persecutions by the Ottoman Turks. The Pontiff needed a translator and Bishop Balakian volunteered to go to Mersin to assist. He  was appointed Primate of Marseille, where he initiated the building of the unique Cathedral that he built and consecrated, dedicating it to the 5th century Holy Translators (Srbots Tarkamanchats) of the Holy Bible. The finest Armenian Church architecture in Europe.

The Cathedral in Marseille

Asbed Vahan Khorasanjian of Constantinople happened to meet Bishop Balakian, while performing the liturgy and delivering his sermon in the Cathedral of St. Jean de Baptiste in Paris. At the time he was the pastor of the Armenian Church in Manchester, England. Listening to the sermon Khorasanjian was impressed both by the Bishop’s eloquence and performance, offered benevolence for a project at his discretion. Both, benefactor and the Primate agreed for the construction of a Cathedral in Marseille France, where he was assigned Vicar by His Holiness the Catholicos of All Armenians.

They chose the district of Boulevard Prado, commissioned architect Aram Tahtajian who designed the cathedral very similar to the Cathedral of Holy Etchmiadzin, and built the church in 1931,   a most impressive Armenian Cathedral indeed, unique in Europe, that Bishop Balakian consecrated on October 25. He named the church after the Holy Translators of the Armenian Bible, while the choir sang under the direction of Vartan Sarxian, a disciple of Gomidas Vartabed, with soprano Armenag Shahmouradian. In attendance was a large crowd with civic authorities and Catholic Church dignitaries. Posthumously statues of Bishop Balakian and benefactor Khorasanjian were placed in the church yard.

One might think that after accomplishing so much, the Primate of the Diocese of Marseille would enjoy decades of service and contentment. He was in his fifties as yet when clouds overshadowed to disrupt his good ministry. He rescued himself from Turkish persecutions, but soon was persecuted by his own for no reason, other than sheer jealousy. Barely had he performed his first liturgies during the first year, the benefactor Asbed Vahan Khorasanjian revealed that the church property was exclusively under his name, himself being the owner, with the key to the church in his pocket. Bishop Balakian was somehow humiliated being unable to perform with dignity, knowing also that some parishioners had started gossiping behind him to the benefactor to such a degree that the “owner” decided to shut the doors of the church for a while “until tension calmed.” A few months later the benefactor sent a circular that the Cathedral is open and the Bishop will return to officiate. The Cathedral opened but the Bishop never returned, and two years later he passed away at age 59.

The next unfortunate event happened on June 23, 1932, during the solemn Divine Liturgy at the newly consecrated Cathedral on the Feast of the Holy Translators. Headed by their priest, a handful of one of the diocesan St. Louis church’s parishioners entered he Cathedral and disrupted the sermon of Bishop Grigoris Balakian, disgracefully yelling “to step down” from the altar, blaming him for their church’s mortgage, the parish being unable to pay while he was comfortably enjoying the new cathedral. The Bishop astounded walks down asking some known faithful to assure the payment of their debts, while feeling himself deeply affected to the point that it marked the last day to visit the Cathedral. Almost the first and the last, and never again Bishop Balakian entered the Cathedral, instead he transferred the Diocesan offices to St. Gregory church in Baumont. We read those details in the well documented book written by Deacon Stepan Boghossian about the History of the Armenian community of Marseille.

Bishop Grigoris Balakian’s incomparable legacy is his documentary two-volume books entitled “The Armenian Golgotha” as an eyewitness of the atrocities against the Armenians during the exile and the genocide, published in 1922. They cover the untold events as he himself went through against Armenians in Turkey, left walking on unending marches, naked and hungry. He has included the numerous churches and cultural centers across Turkey, confiscated and destroyed. He also reflects on those like himself who survived under horrible conditions. Telling about himself, the Bishop writes how he escaped persecutions hiding in the wooden forests, and while among the people, presening himself a German soldier for safety. Bishop Balakian has distinguished himself as a learned, active, humble and intelligent servant of God, honorably representing his alma mater the famous Seminary of Armash.