The Big Book Of Armenian Letters 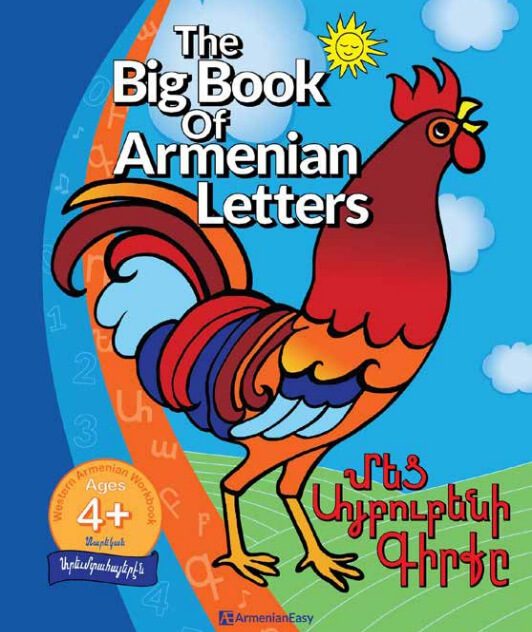 ArmenianEasy, LLC, a publishing house established in 2019 by Armenian-American sisters Cathy Jacobs Brito and Jenny Jacobs Mullen, announces the publication of their first book: The Big Book Of Armenian Letters, a first-of-its-kind Western Armenian alphabet workbook for children ages 4 and up. ArmenianEasy’s goal is to provide Western Armenian educational materials that facilitate Armenian language learning (speaking, reading, and writing) for all, including those who may not have the benefit of hearing Armenian spoken in their homes. They have several more books planned for the near future.

The website ArmenianEasy.com and their alphabet workbook were created to fill an educational need. As a homeschooling mother of four, Jenny was trying to find an Armenian workbook to teach her oldest child Armenian letters. She was looking for preschool/kindergarten level activities that would help teach the Armenian letters, without progressing too quickly. Jenny explains, “I wanted something like ‘The Everything Book of Preschool Letters’, but in Armenian. So I turned to my wonderful artist-of-a-sister, Cathy…” Artist and designer Cathy, began creating activity pages for Jenny’s children. The little “side project” quickly blossomed into The Big Book Of Armenian Letters, a beautifully illustrated, 328 page, black and white book filled with activities that introduce children to the 38 letters of the Aypoupen (Armenian alphabet). The activities include mazes, coloring pages, matching, 240 Armenian words, 6 songs, one Bible verse in Western Armenian, and much more.

Their Armenian mother, Hourig Toukhanian Jacobs, laid the groundwork for this endeavor. Hourig was a true master in the realm of teaching Armenian to non-native speakers. As a teacher for the Detroit area A.R.S. schools and as an independent educator, she taught Armenian language to learners of all levels and backgrounds for more than 40 years, usually creating her own curricula from scratch. As a teenager, Cathy began making ink drawings to illustrate her mother’s weekly lessons. It was in observing her mother’s classes and in the long animated discussions with her mother after classes, that she learned the effectiveness of using simple repetitive exercises and games to teach students the building blocks of language. This knowledge informed ArmenianEasy’s philosophy for creating teaching materials, “Make learning Armenian simple and fun.”