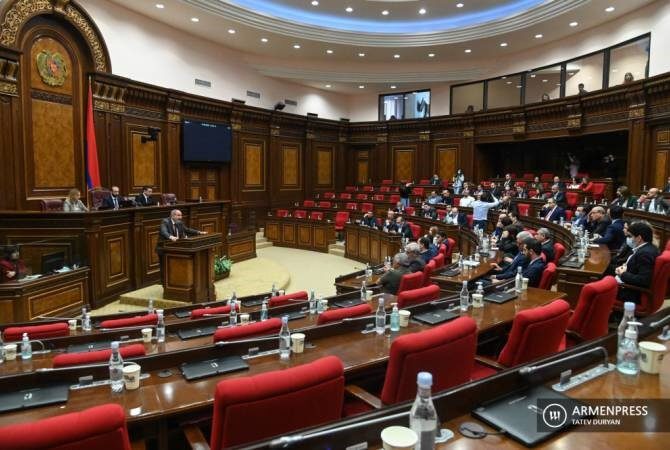 The National Assembly of Armenia did not elect Nikol Pashinyan as Prime Minister for the 2nd time according to the political consensus to call early elections. The Constitution of Armenia envisages that the parliament gets dissoved if it fails to elect a Prime Minister twice.

A stable operational situation with no incidents has been maintained along the Armenian-Azerbaijani line of contact of the Armenian state border overnight May 10-11, the Defense Ministry of Armenia told ARMENPRESS.

According to the information provided by the Armenian National Security Service, no border incidents were registered in Vorotan-Davit Bek section of the Goris-Kapan inter-state road which is under the responsibility of the NSS border troops.

The Armed Forces of Armenia and the NSS border troops confidently control the border situation along the entire borderline.

ARMENPRESS: On May 11 in Baku the Russian and Azerbaijani foreign ministers Sergey Lavrov and Jeyhun Bayramov spoke about the need for solving humanitarian issues. In this context the provision of minefield maps were mentioned. How would you respond to this statement?

Mane Gevorgyan: Committed to its assumed humanitarian commitments and universal values, Armenia has always prioritized the solution of issues of humanitarian nature. At the same time, we find the non-implementation of obligations assumed by clause 8 of the November 9 trilateral statement to be inadmissible, which Azerbaijan is trying to justify with ungrounded comments. The international community’s stance over the immediate and unconditional repatriation of prisoners of war and other detainees is more than clear.

Armenia’s foreign ministry has expressed its deepest concerns over the ongoing clashes in Jerusalem.

“We are deeply concerned about the ongoing clashes in Jerusalem. We call on all parties involved to exercise restraint in order to reduce tensions and prevent further civilian casualties”, the MFA said in a statement on social media.

Tensions in East Jerusalem started growing since mid-April. On May 7, clashes between the Israeli border police in Palestinians started near the Temple Mount and in Sheikh Jarrah district, where law enforcement officers perform eviction of several Arab families under the decision of the Israeli court, which accompanied by protest actions of the local population and fierce clashes, TASS reported.

The delegation of the Parliamentary Assembly of the International Organization of La Francophonie visited the Tsitsernakaberd Armenian Genocide Memorial in Yerevan during their visit to Armenia.

The delegates laid flowers at the Eternal Flame in honor of the victims of the genocide and then toured the Armenian Genocide Museum-Institute, the parliament’s press service said.

The US government issued emergency legislation on Sunday after the largest fuel pipeline in the US was hit by a ransomware cyber-attack, reports BBC.

The Colonial Pipeline carries 2.5 million barrels a day – 45% of the East Coast’s supply of diesel, gasoline and jet fuel.

It was completely knocked offline by a cyber-criminal gang on Friday and is still working to restore service.

The emergency status relaxes rules on fuel being transported by road.

It means drivers in 18 states can work extra or more flexible hours when transporting gasoline, diesel, jet fuel and other refined petroleum products.

EU calls on U.S. and others to export their COVID-19 vaccines

The European Commission called on Friday on the United States and other major COVID-19 vaccine producers to export what they make as the European Union does, rather than talk about waiving intellectual property rights to the shots, Reuters reports.

Commission head Ursula von der Leyen told a news conference on the sidelines of a summit of EU leaders that discussions on the waiver would not produce a single dose of COVID-19 vaccine in the short- to medium-term.

«The European Union is the only continental or democratic region of this world that is exporting at large scale,» von der Leyen said.

She said about 50% of European-produced coronavirus vaccine is exported to almost 90 countries, including those in the World Health Organization-backed COVAX program.

Only higher production, removing export barriers and the sharing of already-ordered vaccines could immediately help fight the pandemic quickly, she said.

News from the World: Death Toll In Gaza Strip Rises To 28, Including 10 Children

Starting from Monday, over 200 missiles have been fired to the Israeli territory from Gaza Strip. Starting from 13:00, Palestinian militia have kept Ashdod city under fire.