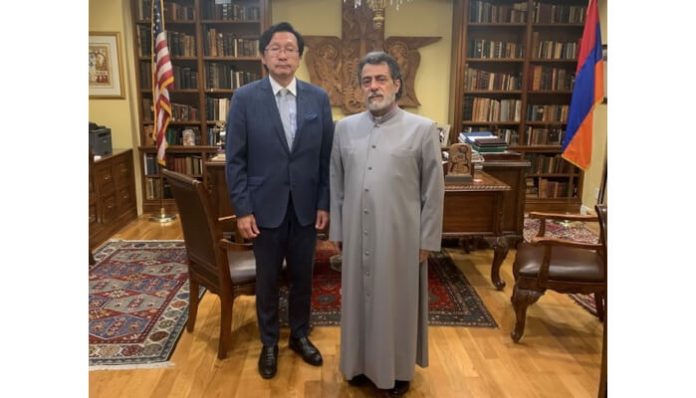 His Excellency Akira Muto, Consul General of Japan in Los Angeles visited the Western Diocese of the Armenian Church of North America on Monday, June 7, 2021.

In a meeting with the Diocesan Primate His Eminence Archbishop Hovnan Derderian, Consul General Muto gladly informed Archbishop Derderian that the Japanese government has allocated $3.6 million in humanitarian assistance through such international organizations as UNICEF, UNESCO and IOM to families who have been impacted as a result of the 44-day war in Artsakh last fall.

A $700,000 grant has also been allocated by the Government of Japan to the Diocese of the Armenian Church in Tavush for the construction of a Youth Center.

The Diocesan Primate also proposed mediation through UNESCO for the preservation of Armenian Churches and cultural sites. Consul General Muto stated that the Primate’s proposal will be communicated to the Headquarters of the Consulate General.

In September 2019, the Western Diocese of the Armenian Church of North America and the Consulate General of Japan co-organized a spirited celebration of friendship between the Armenian and Japanese communities. The standing-room-only audience was inspired by the cultural fusion and historic ties. The momentous event celebrated the undying legacy of Diana Apcar, reflecting on her symbolic life and her humanitarian aid during a perilous chapter in Armenian history as she provided emotional care and financial assistance for Armenian Genocide survivors who found refuge in Japan. The historic event was supported by the Little Tokyo Service Center, the Japanese American National Museum, and the Japanese American Cultural and Community Center.