80th ANNIVERSARY: The Cathedral of St. Gregory The Illuminator And The Memorial Chapel 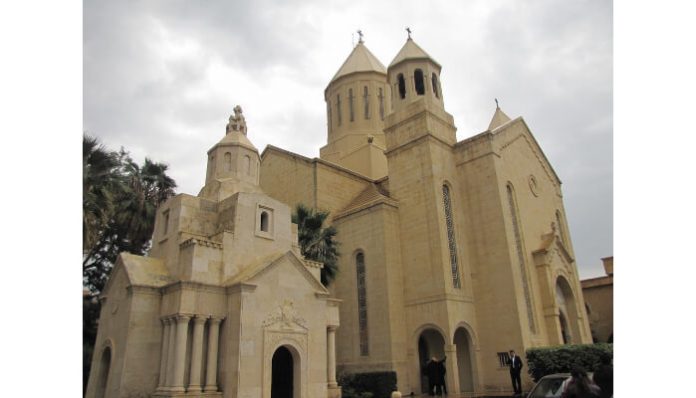 The Cathedral of St. Gregory The Illuminator

And The Memorial Chapel

The Catholicosate of Cilicia in Antelias

The four years of Archbishop Bedros Sarajian as the Vicar General of the Catholicosate of Cilicia marked the most fundamental years in the establishment of the historic See of Cilicia in Antelias, Lebanon, beginning with the purchase of the property and the building of the Cathedral.

We concluded the turbulent last 2020 year without overlooking the heroic task performed 80 years ago as the Historic See from Cilicia was established in Lebanon following WWI. The Venerable Catholicos Sahak Khabayan of Cilicia, exiled from Sis, and later from Adana, trying persistently to return to Sis, and realizing the geo-political status of Cilicia at the proclamation of the 1923 Republic of Turkey, invited in 1930 and consecrated in his leading Diocese of Aleppo the Catholicos Coadjutor Papken Gulesserian as his successor. Both were at the helm of the difficult task for less than a decade only, when unfortunately Catholicos Papken predeceased the Venerable Catholicos Sahak Khabayan.

Both passed away, Catholicos Papken at age 68 in 1936, Catholicos Sahak at age 90 in 1939, not seeing the acquisition of the property nor the building of the Cathedral. The property in Antelias was a Near East Relief orphanage, and its use by the Catholicosate of Cilicia was temporary, uncertain, and limited. They managed the existing hall to serve as chapel and the rooms as classes for the first seminarians. Catholicos Papken had invited the Very Reverend Shahe Kasparian, a graduate of Armash Seminary, studied under him, ordained him a bishop and assigning as the first Dean of the Seminary. He served for five years. There was also among the clergy the Very Reverend Paren Melkonian, also a graduate of the Seminary of Armash, who later was ordained a bishop, serving as a fulltime instructor in the Seminary.

The aged Catholicos Sahak Khabayan had assigned Archbishop Bedros Sarajian, former Primate of Hajin, Vicar General who soon was elected Catholicos of the House of Cilicia succeeding Catholicos Khabayan in 1940. Before his election the Archbishop concluded the purchase of the land of the Catholicosate with a generous donation of Simon and Matild Kayikjian of Cairo, Egypt, and soon after in 1940 the beautiful Cathedral was built through contributions of the faithful, designed by architect Mardiros Altounian, under the watchful direction of Archbishop Sarajian. From his own savings he also provided funds for the impressive marble Throne of the Catholicos. He ascended to the throne as Catholicos Bedros I Sarajian only twice since he passed away in September of 1940 at age 70. His pontificate lasted only a few months.

St. Gregory the Illuminator Cathedral stands as one of the most impressive Cathedrals with high elevated cupola and two smaller ones as bell towers. Considering the time and the means in late 30’s, fund raising and support from the faithful just survived the Genocide of 1915 was difficult, and yet the construction of the magnificent Cathedral completed so rapidly can only be the pride and the legacy of the Armenian Christianity. Gradually proper decorations in the interior, stained glasses and icons, completed the dignity of the shrine.

Archbishop Sarajian’s courageous and most unusual achievement was also the building of a chapel next to the Cathedral where he preserved the relics of those who were exiled and martyred in Deir-el-Zor, Syria during the massacres. The chapel designed architect Vahram Kurkjian from Cyprus. Archbishop Sarajian commissioned Harutyun Hovagimian of Hajin to go and collect some of the relics from Syria to be blessed in the chapel with dignity and honor. The laying of the foundation was blessed by Archbishop Sarajian on the feast day of St. James of Nisibis, who later consecrated the chapel, a square based edifice crosswise with three iron gates.

Inside, behind glass windows relics (bones) are displayed, with an altar where Holy Mass is performed once a year on April 24. He performed the ceremony of the inauguration of the Memorial Chapel on April 23, 1939. During the ceremony the Archbishop said: “As we honor our martyrs of the Genocide we realize that each one of us has a parent or a relative whose relics we preserve in this chapel. They remained faithful and steadfast in their religion and nation, and we can only venerate their memory first hand.”

Catholicos Bedros Sarajian will be remembered as the Builder of the Catholicosate in Antelias, despite the difficult times. The insight he demonstrated yielded with his achievements one after another, all of them within two narrow years. Next, Catholicos Bedros undertook in 1938 the building of two more structures, the official residence of the Catholicos, the Veharan, with the chancellery and reception hall, and the building of the three-story Seminary where students studied and lived, the third floor being a large bedroom for all the students.

A second Seminary building was built years later, the year I was a student, designed by architect Haigashen Ouzoonian. Both Seminary buildings became connected with an outdoor passage. I remember with affection when students were told to symbolically carry a stone each to the building site. The new addition served as a library for ancient manuscripts and books and conference rooms. Since then many improvements have added to the impressive appearance of the entire complex, including the building of a mausoleum for the deceased brotherhood of the Cilician See.

As a member of the seminarians representing the graduation of 1954 I have the honor to present this overview commemorating the 80th anniversary of the revival of the Catholicosate of the Great House of Cilicia.