Language of Worship in The Armenian Church 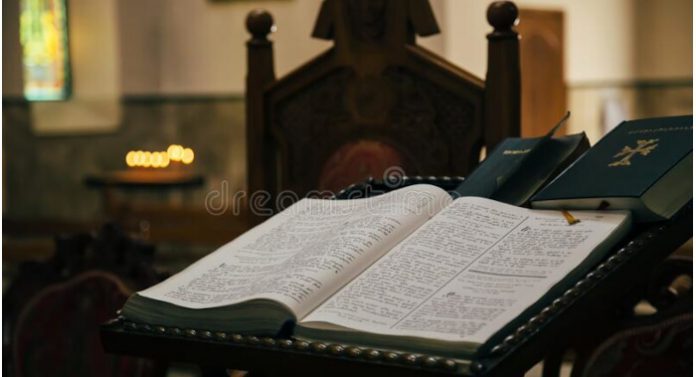 In the process of the reformation of the Armenian Church, the language of worship has been rehashed all along, trying to translate liturgical texts from the original Classical Armenian into the vernacular, and further into local languages. It has always been argued, and rightfully so, that the ancient grapar  is not understood by the faithful, and as the Holy Bible is translated into ashkharhapar, modern Armenian, why not treat same with the texts of the Liturgy, the hymns, and the canonical hours of daily worship. The case is more complicated than we think because the question is beyond mere translation; it challenges and risks textual, doctrinal, and theological deep and serious disorder.

As one begins to translate liturgical texts, one shall at once meet hidden challenges in terms of theology and music of the chants and the hymns involved, and for that matter we should be mindful that not one verse of our 1000 years old Armenian sharagans (hymns) can be translated into any language other than studying and learning purposes. The authentic music of those hymns is tuned exclusively to the Classical Armenian that cannot be otherwise adapted to another language making impossible to sing differently, and if one tries to do, one simply makes mockery out of it. Instead, all forms of publications in local languages are truly needed for study and learning only, and not for performance. Learning sessions are entirely different from performing and officiating. The former is lesson and the latter is worship.

The 20th century revealed even a deeper dimension of the case in the West when the   vernacular came to be “useless” and local languages invaded into the worship, to a degree where the vernacular was not even understood by many, and the Sacraments were comfortably performed by local languages. This opened the case of justifying the “personal” need for the Sacraments to be understood by parents and the youth.

Regarding the Divine Liturgy, however, the performance of the Holy Eucharist was given the strict orders from the Hierarchy not to perform in any other way, even partially, than the original Classical that has kept the Armenian Church still in unison as the last step in our communities worldwide, despite the available translated versions for learning and for following the Holy Badarak, while performed solemnly. Otherwise, both text and music are tragically impaired and the essence of the Eucharist is seriously jeopardized.

It is regrettable to see some careless handling of the Divine Liturgy when certain priests cut short the completion of the text removing the entire part of the preparation, including the priest’s confession and the purification, thus deleting the solemn hymn of the entrance and the confession, and above all the preparation of the Gifts, the bread and the wine, behind the closed curtain. This is followed by the elimination of the procession of the priest among the faithful. How can a priest ignore all these to “save” half an hour from the performance and magically appear with the intonation of Orhnya Der.  In his estimation the Divine Liturgy as if begins from that point, giving the big excuse       also that people do not attend until later. They do not admit that because of their negligence people come late, ignoring the other side of the story by those who raise complaints for the short cuts.

The Armenian Church is enriched with six canonical books: Holy Bible, Breviary, Hymnbook,  Book  of Sacraments,  Book of the Holy Eucharist,  the Lectionary, each providing the proper use for    daily or annual seasonal worship. Each book is compiled from the Holy Bible as its foundation, declaring the formulations of the First Three Ecumenical Councils, headed by the Nicene Creed. The Book of the Eucharist is for the celebration of the Divine Liturgy, and once kept on the Holy Altar should stay there on its special lectern to be used by the celebrant priest or the visiting bishop. This basic celebration has five integral parts: Preparation, Synaxis, Eucharist, Anamnesis, Last Blessing, to be performed in its entirety and in the Classical Armenian, its authentic language.

The Breviary contains the seven daily worships, Mid-night, Morning, Mid-day, Evening, Sunrise, Peace, and Rest services. Prayers and litanies in each are totally Biblical, readings and chanting. The Lectionary is the largest volume among all containing Biblical readings extensively, in addition to special prayers from the Church Fathers, as well as special services for annual occasions, such as the Blessing of the Water on the Feast of the Nativity, commemorating the Baptism of Jesus by John the Baptist, the Blessing of the Grapes, on St. Mary’s Feast, the Antasdan Processions (Blessing the four cardinal directions of the world) on the Eve of the Feasts of the Holy Cross.

The Armenian Church is ultimately an Armenian Christian institution, holy and authentic. If the vernacular and local languages appear in the picture, we should use them as auxiliaries and never as exchangeable. Only this way we can take a step forward toward any reformation. In the West this step has been implemented as much as possible, in Americas, Canada, Europe, and Australia. Local languages are used mainly when “personal” Sacraments are administered, always under the shades of the original language to secure authenticity, integrity, and unity worldwide. As mentioned the “personal,” on the other hand the “communal” service represents the Holy Eucharist above and beyond the so called personal need when certain Sacraments are performed. Therefore, any change in the context and language of the Holy Badarak becomes hazardous and non-canonical.

The Book of the Holy Eucharist, the Badarakamadooyts, remains superior over the rest, next only to the Holy Bible. Ideally it is the responsibility of the faithful to study the text in any language they choose before attending the performance, leaving no room to complain that they do not understand what is being offered on the Holy Altar.