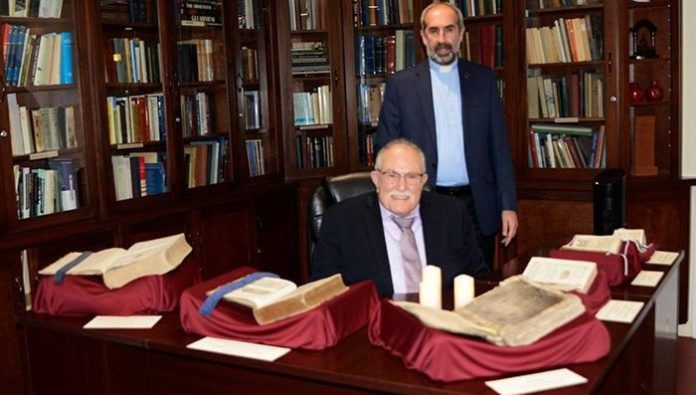 The dedication ceremony for the Armen Aroyan Library-Museum took place in the backyard of the Armenian Cilicia Evangelical Church in Pasadena on Saturday, October 9, 2021, starting at 5:30 p.m.

Rev. Serop Megerditchan, the senior pastor of the church, offered the opening prayer, and then invited the Master of Ceremony, Mr. Ara Assilian, to facilitate the dedication. Mr. Assilian is the Chairman of the Church’s Parish Council.

In his remarks, Mr. Assilian paid homage to Armen Aroyan’s 40 years of service as the Choir Director of the church . He then expressed his and the Church Council’s gratitude for Mr. Aroyan’s generous contribution to the church, in which an empty room was renovated into a reputable Library-Museum, where more than 3,000 of Mr. Aroyan’s historical books, rare coins, stamps and cupper artifacts were given a home for permanent display.

Mr. Assilian also donated a rare rock from Mount Ararat, brought to him by Harout Der Tavitian, who had led an expedition to the top of the Armenian mountain from Turkey’s side. It will be part of the permanent exhibition in the newly dedicted Armen Aroyan Library-Museum.

Rev. Berdj Djambazian, Minister to the Union, thanked God for this unique opportunity and praised Armen Aroyan for his years of service to the Armenian Cilicia Evangelical Church.

Next, Rev. Kevork Terian, the former senior pastor of the Armenian Cilicia Evangelical Church, took to the podium and spoke about Armen’s dedication to his clients, whom he took on a pilgrimage to their ancestral lands in Western Armenia.

I could attest to this firsthand, as my wife and I went to Western Armenia with Armen Aroyan in the Fall of 2007. We began our tour from Istanbul and one of the sites that we visited was the tomb of the newly assasinated Armenian newspaper editor, Hrant Dink. Armen Aroyan made an extra effort to take the group to each participant’s ancestral home. Thus, we visited the village of Gemerek, the birthplace of my mother in law’s parents,  in the province of Sivas (Sepastia).

Among other places that we visited was the village of Peri in the province of Kharpet, where my father in law was born. The group was gathered around the fountain in the village’s main square, while I was chatting with some of the local villagers. There, I learned that the valley nearby was called the valley of Dakess, after my father in law’s family name, Dakessian.

When I mentioned this to Armen, on the way back, he made an extra effort to go back and visit the same valley. Then my wife recalled that her aunt used to tell her about her father being slain on top of the hill that belonged to him and dragged down to the river Eupհrates.  Talk about emotions and deeply hurt feelings, that surfaced with this sudden revelation . Its hard to put into words, and we have Armen to thank for the experience.

The cultural program included a dance performance presented by members of Patil Dance Academy and a musical recital presented by Vem Musical Ensemble of UCLA, under the direction of Movses Boghosian.

Peter Cowi, UCLA Narekatsi Professor of Armenian Studies, was the Keynote Speaker. He dwelled upon Armen Aroyan’s vast knowledge of the historical sites in Western Armenia, including the churches, the monuments, the famous convents, and the scattered cemeteries. Unfortunately, some of those sites were in such ruins that they were hard to identify.

In his closing remarks, Rev. Megerditchian thanked everyone for attending the ceremony and noted that the Armen Aroyan Library-Museum will be utilized in the future for lectures, recitals, and exhibitions on a regular basis. He then invited Armen Aroyan to cut the ribbon and invite the guests to visit the Library-Museum.