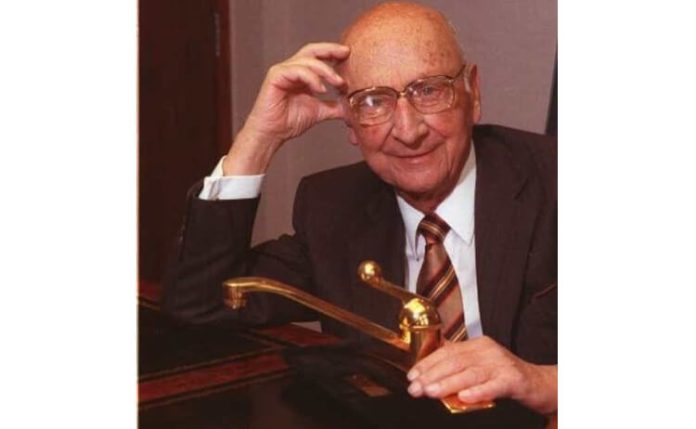 The 20th century Armenians, both in the Homeland and in the Diaspora, were most fortunate to have this outstanding person Alex Manoogian as their great benefactor and the distinguished President of the AGBU for 36 years. Born in Kasaba, near Smyrna, Alex a 19 year old youth, travelled to the United States by sea in 1920 virtually with nothing, speaking three foreign languages but not English, $50 in his pocket and no experience, eventually to distinguish himself as the brightest star under the Armenian cloudy skies and in this blissful land of America, silently leading our people both in Armenia and abroad, despite the most tragic political geography following WWI. The following is a tribute by this writer, the eyewitness pastor of the Armenian Church in Florida, who had the privilege to meet occasionally with Mr. and Mrs. Manoogian from Michigan on their winter vacation.

Truly humble and with a great personality, Mr. Manoogian while in Florida would call to visit the newly built St. David Armenian Church office where I was assigned the founding pastor since 1984, and on occasions would invite me and Yeretsgin Joyce to take a ride in his own boat along with Mrs. Manoogian and friends. One day he whispered to me and said “I feel fortunate with the guidance from above,” not mentioning all the responsible and honorable achievements behind his most benevolent non-stop activities and skillful undertakings known worldwide as the owner of the MASCO international firm. I reverently replied saying, “Mr. Manoogian fortune does not come by itself; it is earned with dedication and the kind of knowledge and concerns you have displayed all along.” He used to smile through his blue eyes to express his impressive satisfaction on his illustrious face.

President of the AGBU

Mr. Manoogian was telling me he never met the founder and the first President of the AGBU Boghos Noubar Pasha until at age 15 when he encountered his picture at the elementary school in Kasaba in one of the history text books. “I liked the picture and decided to copy it on a larger scale and donate to the school for sale to benefit the school” Mr. Manoogian said. He told me this predestined and legitimate association under the light of his future life and position with love, and I heard it twice with admiration. I was amazed as to how much closer he could get at his tender age to the great Founder and the First President Boghos Noubar, turning his 5th successor, both of them unmatched indeed. He was elected President of the AGBU on December 12, 1953, when the Center of the AGBU had moved from Paris to New York City in 1940, under Arshag Karageuzian, President who resigned in 1953, and the 40th Assembly elected Alex Manoogian President.

The immediate future attested that his personal, family, and community life crossed all boarders and Alex Manoogian’s name as a great benefactor spread worldwide associating both his and his wife’s name honorably and respectably with new schools and cultural centers, built and donated through his benevolent funds by dozens in every country and every Armenian community. Not only he multiplied the funds and the congenial activities of the AGBU, raising the total funds of eight million dollars of the Union from 1954 to fifty million dollars during his 36 years tenure, but he also established alert and active branches of the AGBU all over the world, himself visiting to most of them periodically. Regretfully most of those branches have ceased ever since.

He built 13 elementary schools well famed by their individual names that I could list, and 10 cultural and athletic centers, headed by the Armenian Home for the Aged in Michigan and   dedicated to his parents Takvor and Takouhi Manoogian. The Home for the Aged has been functioning with full capacity of Armenian elderly in the state of Michigan for many years. None of those schools closed the doors for any reason as long as Mr. Manoogian was living. Unfortunately disastrous closing of schools and AGBU branches took their course rapidly, following the closure of the Melkonian Institute in Cyprus in 2006, year after year, due to the new administration succeeding him after his demise in 1996 at age 95.

His Holiness Vasken I

Almost simultaneously in 1955 the Armenian Church was blessed by the election of Vasken I, Catholicos of All Armenians.  Catholicos Vasken I and Alex Manoogian providentially became the much needed leaders of our Church and people in the second half of the 20th century, the Pontiff displaying full and unreserved trust in him when commissioned Mr. Manoogian on several important missions. As benefactors, upon the request of His Holiness, Mr. and Mrs. Alex Manoogian donated full funds for the building of a Museum for ancient artifacts and manuscripts in Holy Etchmiadzin. The Museum inaugurated in 1982 near the Pontifical Palace (Veharan) in the presence of the benefactors by the hands of His Holiness, surrounded by Diocesan Bishops from Armenia and abroad.

The Catholicos of All Armenians met Alex Manoogian several times in the Mother See and in the United States. They met twice in Jerusalem where the dedication of the newly-built Seminary donated by benefactor Manoogians was taking place in 1975. For another reason, the Pontiff deeply concerned, commissioned President Alex Manoogian in 1967 to rescue those 23 ancient Armenian manuscripts shamefully and treacherously taken from the vaults of the Patriarchate of Jerusalem to London for auction by the hands of irresponsible leadership of the Patriarchate. Benefactor Alex Manoogian paid the required ransom and rescued the manuscripts and returned them to Jerusalem.

The Masco Corporation in Detroit

Alex Manoogian began his career in Detroit from humble stages, learned, taught, and accomplished, concluding his magnificent successes, living there all his life since 1924. Previously he apprenticed in designs of auto parts in the prime city of car industry, and soon established his famous Delta Faucets development in 1929 and turned it into a worldwide undertaking. All of the successes Mr. Manoogian achieved were credited primarily and exclusively to his intelligence, skill, hard and honest work, added to his unwavering optimism, smile always on his face. At its peak three billion dollars was the annual transaction of the MASCO Corporation while Alex Manoogian was handling his prestigious firm.

We were all gatheredin Detroit to mark the 85th birthday of Alex Manoogian in 1986. Guests from far and near were received by the Benefactor individually at the entrance of the MASCO Corporation, followed by an outstanding reception dinner. To our great surprise on Sunday, during the episcopal Divine Liturgy at St. John the Baptist Armenian Church, Deacon Alex Manoogian performed the presentation of the Gifts, raising the Chalice ceremonially for the celebration of the Holy Mass, wearing the proper robe and stole of an Archdeacon. We were in Detroit again to celebrate Mr. Manoogian’s 95th birthday, and for the third time in July, 1996 as he bid farewell to this world and passed away at age 95. For the funeral of this great man His Holiness Karekin I Catholicos of All Armenians arrived in Detroit from Holy Etchmiadzin to preside over the services, assisted by ten bishops and numerous clergy from all over including this writer.

It was only a few months before Mr. Manoogian’s passing that in 1996 the St. David Armenian Church parish in Boca Raton, Florida, became the fortunate beneficiary, when approached by this writer, then the pastor of the newly built St. David Armenian Church, requesting to offer funds for the building of the first and the only Armenian parish school in Florida on the church premises. No questions asked, the great benefactor said he will help. On February 18, 1996 Mr. Manoogian was present at the ground breaking ceremonies of the school presided by His Holiness Karekin I Catholicos of All Armenians of blessed memory, assisted by the Primate Archbishop Khajag Barsamian who led the Catholicos to Florida and performed the Sunday Mass. Mrs. Marie Manoogian had passed away in 1993. Father Arzoumanian conducted the laying of foundations ceremony. Regretfully Benefactor Alex Manoogian could not see the school completed and inaugurated, due to his passing in July 1996. We dedicated the opening of the new school later in October and remembered the legacy of the Benefactor with gratitude and love. A message of blessing and gratitude was sent by His Holiness Karekin I Catholicos of All Armenians from Holy Etchmiadzin to mark the occasion.