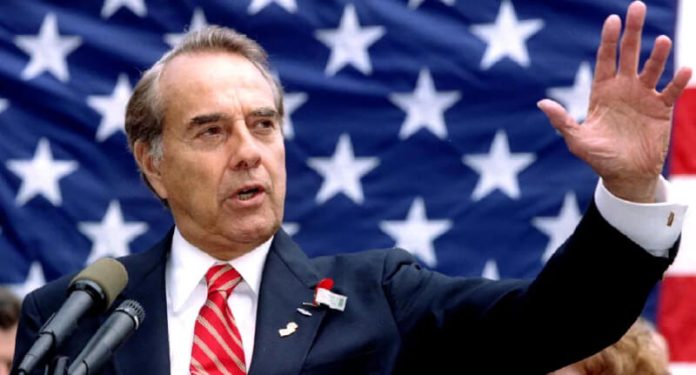 For millions of Americans, Bob Dole was the epitome of American exceptionalism, a leader who represented and reflected the qualities that make the United States the envy of the world.

He was part of the Greatest Generation who served the United States for close to eighty years with distinction and honor. From the battlefields of World War II to the halls of the U.S. Senate, Dole left an indelible mark on U.S. history that continues to reverberate to this day. A politician and statesman from a bygone era, it is one of the reasons why there has been a cacophony of voices honoring him and the life he lived in the wake of his passing earlier this month.

For Armenians He Was Something Else

But for thousands of Armenian Americans, Dole was also something else. He was a friend and champion of our causes, particularly the recognition of the Armenian Genocide.

As a grandson to survivors of the Armenian Genocide, I always wondered why a U.S. Senator from Kansas would be such an unyielding advocate for an issue that had little to do with his state or constituents. But then I learned how Dr. Hampar Kelikian, a proud Armenian American surgeon, did a great deal for him after he was wounded in World War II. He performed seven operations and refused to accept any payment. It was during this period that Dole learned about the Armenian Genocide because Kelikian was an Armenian Genocide survivor himself.

Through this budding friendship with Kelikian, Dole learned about the first genocide of the twentieth century, when more than 1.5 million Armenians were systematically exterminated by the Ottoman Turks, an event that Turkey still denies to this day. That experience had a lasting impact on Dole that would help inform his political beliefs as a U.S. senator and U.S. presidential candidate. As a public official, he made it clear that America needed to be on the right side of history. His fight for recognition of the Armenian Genocide culminated in 1990 when he sponsored and tried to pass Senate Joint Resolution 212, legislation that would properly recognize the Armenian Genocide by the United States, but faced strong opposition from Turkey, President George H.W. Bush and Robert Byrd, the president pro tempore of the U.S. Senate.

He Made a Great Speech in the Senate

Taking his fight to the Senate floor, Dole made an impassioned speech where he said, “For the one million Armenians in this country, the wounds have been open for almost 75 years, and the hurt is not going to be able to heal because the world has not faced up to the truth of the suffering of the Armenian people in this period of 1915-1923 … because the world stood by and did nothing.»

The resolution was ultimately rejected but it did not deter Dole from using his position in government to raise awareness around the Armenian Genocide and other crimes against humanity. It is why Dole became a primary advocate for Bosnians during the 1990s when he helped support President Bill Clinton’s unpopular plan to send American troops to Bosnia to prevent ethnic cleansing in the region. He saw what was happening and did not want history repeating itself with another Armenian Genocide. Those deeply rooted beliefs played a significant role in the senator’s formulation of American foreign policy towards Bosnia from 1992—1995.

His Support Went Beyond Recognition

Dole’s support for Armenian-American issues also went beyond genocide recognition. After a devasting earthquake struck Armenia in December 1988, Senator Dole and his wife, Elizabeth, traveled to Armenia to see the damage firsthand while spearheading relief efforts and securing millions of dollars in U.S. aid.

For me personally, Dole was my unsung hero. He did more for Armenian-Americans than any other public servant in U.S. history. While many politicians push for such causes in search of votes and money, Dole did it because he truly believed it. A rare and diminishing commodity in Washington, DC today.

While I never met the Senator in person, we did correspond over the years through letters and email where I would take every opportunity to thank him for his service to our country and the Armenian American community. He was a larger-than-life public official who was authentic and vulnerable at the same time. He stood for his principles and was a champion for the underdog. In many ways, his disability made him stronger, not weaker. Armenian-Americans lost a great and loyal friend. He will be missed.

Stephan Pechdimaldji is a communications strategist who lives in the San Francisco Bay Area. He’s a first-generation Armenian American and grandson to survivors of the Armenian genocide.