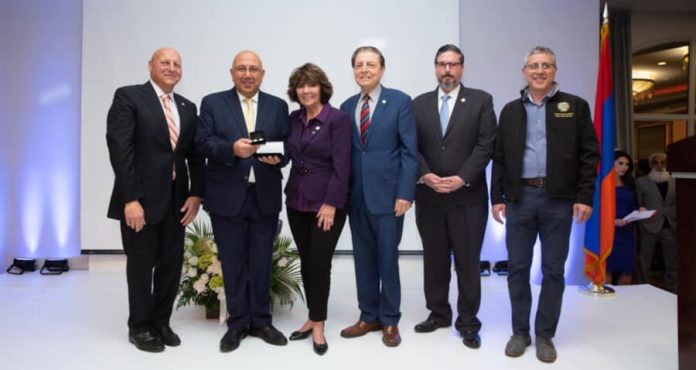 On February 25, the Consulate General of Armenia in Los Angeles organized a farewell reception for Consul General of Armenia Ambassador Armen Baibourtian on the occasion of successful completion of his mission. The event took place in the banquet hall of the Armenian Society of Los Angeles in Glendale. The reception was attended by U.S. elected and appointed officials, including members of the California State Senate and Assembly, Los Angeles City Council, Glendale Mayor and City Council, U.S. Department of State, spirituals leaders of the Armenian community, leaders and representatives of political, benevolent, youth, cultural organizations, and public figures. More than 500 guests attended the reception. The event’s Mistress of Ceremonies was Araksya Karapetyan, an Armenian-born American renowned television personality and anchor for the Los Angeles-based KTTV FOX11.

Speeches were delivered on the occasion by His Eminence Archbishop Hovnan Derderian, Primate of the Western Diocese of the Armenian Church of North America, His Grace Bishop Torkom Donoyan, Prelate of the Western Prelacy of the Armenian Apostolic Church of America, the Most Reverend Mikael Mouradian, Bishop of the Armenian Catholic Eparchy of the US and Canada, Rev. Hendrik Shanazarian, Minister to the Armenian Evangelical Union of North America, and former Primate of Artsakh His Eminence Archbishop Pargev Martirosyan. Among the American officials, California State Senator Anthony Portantino, Los Angeles County Supervisor Kathryn Barger, California State Assembly members Chris Holden and Laura Friedman, Los Angeles City Council members Paul Krekorian, Kevin De Leon, John Lee, Mitch O’Farrell, Los Angeles City Attorney Mike Feuer, Los Angeles County Assessor Jeff Prang, and Mayor of Glendale Paula Devine took the floor. They highly appreciated the work of three and a half years of Consul General Baibourtian, emphasizing his role in elevating the cooperation between Armenia and California to a completely new height and exercising leadership in strengthening the partnership with the community, and bridging it with the Homeland. The City of Los Angeles adopted a special resolution on February 8, 2022 honoring Consul General Armen Baibourtian for his contribution to strengthening the bonds of partnership with Los Angeles, which was presented to him by Councilmember Krekorian. He received similar award from the Los Angeles County Board of Supervisors by Supervisor Barger, and Certificates of Recognition and Gratitude from senators and assemblymembers. Mayor Devine handed over to Ambassador Baibourtian a symbolic key to the City of Glendale. State, city, and county officials highly appreciated the path and journey he has gone through and the depth of fruitful cooperation cultivated with him.

During the event, a film titled “The Armenian Diplomat: A Story of Service to the Nation” was shown devoted to Ambassador Armen Baibourtian. These videos and photos depicted and reflected the diplomatic path traversed by Ambassador Baibourtian, including his years of service in 1995-1997 as the first and inaugural Consul General of the Republic of Armenia in Los Angeles.

In addressing the participants of the event, Ambassador Baibourtian highlighted some of his implemented projects that were the first ones in California and even for Armenia abroad. In particular, he spoke about the first ever business conference “California-Armenia: Trade and Investment Opportunities” held out of Armenia that he organized in Los Angeles in 1996.

He also referred to the first Framework Agreement on Cooperation between California and Armenia signed in 2019, which laid a solid ground for bilateral legal framework of partnership.

He touched upon the first Armenian event in Los Angeles that gathered 20,000 participants in front of the Los Angeles City Hall at Grand Park during the visit of the Prime Minister of Armenia in 2019. That number doesn’t count marches, like the Armenian Genocide March for Justice in 2015 or March for Peace during the 44-day Artsakh war in 2020.

Ambassador Baibourtian also brought his contribution to the latter one. He also mentioned the joint event at the Consulate General of Armenia organized jointly with the Pan-Armenian Council of Western USA during the first days of the 44-day war of aggression against Artsakh in 2020, when the Armenian community leadership and the Consul General of Armenia jointly appealed to the entire Armenian community to strongly support the struggling Homeland. During this sole event, $3,3 mln was raised.

Ambassador Baibourtian and his team were attending fundraising community events on daily basis, thus contributing to the hike in raised amounts. He stated that the City Council of Los Angeles, the second largest U.S. city, adopted four resolutions condemning the Azerbaijani aggression.

He also spoke about programs, numerous joint initiatives, and accomplishments during his diplomatic tenure, all thanks to the ever-growing and close partnership with the Armenian community. He expressed his profound gratitude to the entire community.