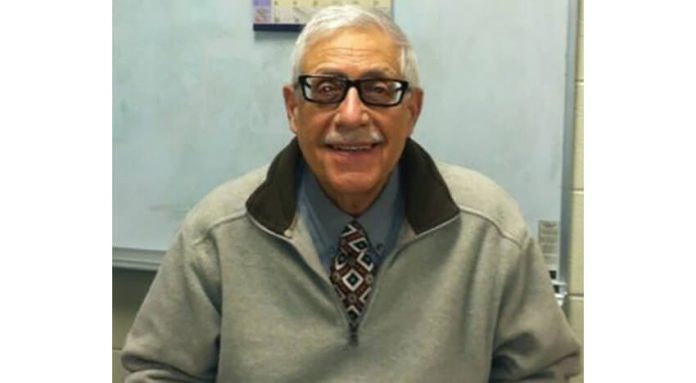 Dickran Toumajan entered into eternal rest, surrounded by family, on Thursday morning, April 7, 2022 after a short battle with cancer.  A loving husband, father, grandfather, son, uncle and friend, Dickran lived a fulfilling and meaningful life; one that radiated with kindness, happiness and joy for his family, students, and friends.  Indeed, Dickran touched the lives of thousands of students and fellow educators throughout his 42 years of teaching in Michigan at the university and grade school levels.

Born in 1945 in Cambridge, Massachusetts to Gürün native Nishan Toumajan and Istanbul native Louise Ajemian Toumajan, Dickran spent his early formative years in the Washington Heights neighborhood of New York City.  The Toumajan home was a welcoming hearth for family and friends, who often gathered to discuss intellectual and cultural topics of the day, in addition to Armenian customs and traditions.  The youngest of three sons, Dickran attended public elementary school in Manhattan, while simultaneously being treated with his siblings, Thomas and Bartev, to baseball games and the movies, thanks to their doting uncles, Hrant and Mihran.

In 1955, the Toumajans left the hustle and bustle of Washington Heights and settled at 55 Union Street in idyllic Milford, New Hampshire, where Nishan worked as an accountant for Raytheon while Louise worked at a local nursing home.  Dickran attended Milford public schools, where he played basketball, baseball and tennis, while working in his late high school years at the local Hayward Farms Dairy.  He graduated from Milford High School in 1963 and enrolled at Bard College for a year before transferring to the University of New Hampshire (UNH) in 1964. Dickran earned a Bachelor of Arts in Political Science from UNH in 1968.

In 1969, upon the encouragement of his uncle Mihran Toumajan – an ethnomusicologist, folklorist, and one of the five dedicated pupils of the Great Gomidas Vartabed in Istanbul from 1909-1915 – who had been living in Soviet Armenia since 1966 and working at the National Academy of Sciences, Dickran relocated to Yerevan.  He lived with his uncle at the former “Hotel Yerevan,” and seriously learned the Armenian language during his first year in the motherland.  In 1970, Dickran matriculated at Yerevan State University’s (YSU) Department of Philology, where he studied Armenian language and literature, as well as comparative languages. He earned a Master’s degree in Armenian Language History and Linguistics from YSU in 1975.

In 1974, Dickran married the love of his life and native of Meghrashen (Shirak Province), Armenia, Anahit Karapetian, who was a YSU Philology Department classmate of Dickran.  In the summer of 1978, Dickran and Anahit, with their toddler son Mihran, settled in Michigan, where Dickran taught Armenian History to the senior class of the AGBU Alex & Marie Manoogian School in Southfield.  In 1979, Dickran embarked on a career as a Lecturer in Armenian Language and Culture at Wayne State University in Detroit.

Founded in 1950 upon the initiative of Professor Kevork Nakhnikian, the Armenian Studies Program at Wayne State University (WSU) is one of the oldest in the United States.  Beginning in 1960, Rev. Robert Puzant Rubyan served as the director of Armenian Studies at WSU, and handed the torch to Dickran in the Fall of 1981.  Dickran taught Armenian Studies at WSU for 41 years (1979-2020), while also periodically teaching Armenian language courses at Oakland University and the University of Michigan, Ann Arbor.  One of Dickran’s favorite subjects, which he taught for over two decades, was a multi-disciplinary course titled “New Soil, Old Roots: The Immigrant Experience,” which highlighted the Armenian, German, Jewish, Polish, Russian and Ukrainian immigrant experiences in the United States, its effects on the cultures (i.e. language, literature, religion, politics, music, art and theatre) of these ethnic groups, and its influence upon American life.  The Eastern European immigration course was usually taught by Dickran in the ornate “Armenian Room” – replete with murals featuring replicas of medieval Armenian manuscripts, as well as Armenian military heroes and intellectuals – located on the Wayne State University campus at Alex Manoogian Hall’s Ethnic Heritage Center.

For nearly three decades, Dickran passionately taught a wide range of subjects at the AGBU Alex & Marie Manoogian School, an award-winning, coeducational charter school accredited by Central Michigan University.  He innately expressed a gentle and understanding disposition towards his students.  Making it simple for students to comprehend, retain, and write about a lesson was fundamental to Dickran, who also taught Armenian Church History to high school-age students at St. John Armenian Apostolic Church’s Sunday School for 30 years.  In addition to teaching, Dickran enjoyed editing “The Manoogian Voice” school newsletter, moderating the annual Student Quiz Bowl, and serving as an assistant coach of the Boys Basketball Team.

Spanning several decades, Dickran volunteered with a number of local organizations, including as a Parish Council member of St. John Armenian Church, secretary of the AGBU Alex Manoogian Cultural Fund, secretary of the AGBU Detroit Core Group, and secretary of the Michigan-based Cultural Society of Armenians from Istanbul.  A lifelong Red Sox and Celtics fan, Dickran enjoyed attending games in Detroit with his family and friends when the Boston teams were in town.

Dickran Toumajan is survived by his wife, Anahit, and their three children Mihran and Talin Toumajan (and son Nishan) of Glendale, California, Armen Toumajan of Los Angeles, California, and Ani Toumajan of Washington, DC.  Dickran and Anahit instilled in their children a love of Armenian history, language and culture.  Their home in Southfield, MI – like Dickran’s childhood home – became a gathering place for family, friends, and the greater community.