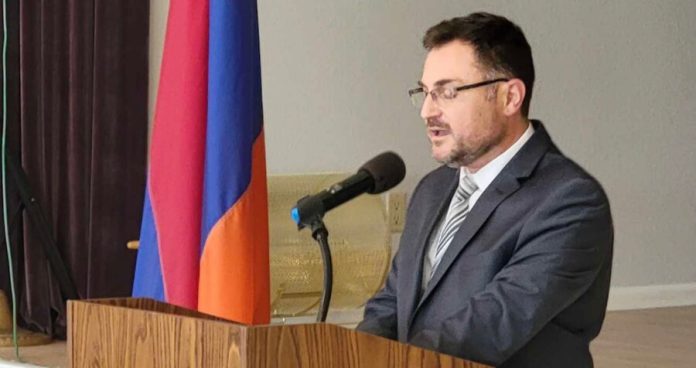 Celebrating the 104th May 28, 1918 Independence of the First Armenian Republic, the Parish Council and the Ladies Auxiliary of the St. Garabet Armenian Apostolic Church of the Western Diocese in Rancho Mirage. The special event was organized on Sunday, May 29, 2022. It started at around 11:00 A.M. with a special church service dedicated to Armenian independence and was followed later by a luncheon, lecture, and a specially tailored cultural program.

After the church ceremony attendees relocated to the Kirkjian cultural hall of the church where the rest of the event commenced.

Parish Council secretary, Dr. Garabet K Moumdjian acted as the master of ceremonies for the event. He spoke about the unique unity that Armenians attained during the May 1918 war against the Turkish Army that intended to once and for all destroy Armenian presence in its historical homeland of millennia. He then underlined the fact that May 28, 1918, was the product of all Armenians coalescing as a single fist; “There was not one party, nor this or that organization, but a single entity known as Armenians fighting for life and preservation.” He then presented the situation today in Armenia and the Armenian diaspora and he underlined the problems that threaten the second independence of Armenia that was attained in 1991 because of the fall of the Soviet Union. Moumdjian also stressed that the disunity among Armenians today is a tremendously negative paradigm that must stop at any cost.

Dr. Moumdjian then called upon Deacon Hovannes Balian to open the event with his rendition of the Armenian and American anthems.

Afterword, church pastor, Deacon Gevork Gevorkian was called upon to present his prayer and a few words regarding the occasion; Deacon Gevorkian stressed the importance of unity among Armenians as a major factor in achieving independence in 1918. He also underlined the important role of the Armenian Apostolic Church in the endeavor.

Master of ceremonies Dr. Moumdjian then introduced the lecturer for the day, Mr. Hratch Sepetjian who currently works as the head of the Armenian department at the Mary Manoogian Armenian High School in the San Fernando Valley. Sepetjian attended and graduated with a degree in Armenian studies from the Yerevan State University and aside his teaching job he is also active a s a writer and journalist.

Mr. Sepetjian first presented a short history of the sociopolitical environment that led to the formation of the first Armenian republic after almost six centuries of being under foreign rule. He then spoke about the convergence of historical events comparing 1918 and 2022 and presented an intricate web of issues that make the two events resemble each other. However, he underlined the fact that while Armenians were all united in May 1918 against the existential Turkish threat, the situation is not the same today since Armenians are infighting instead of uniting against a similar existential threat by the same enemy…

The master of ceremonies then invited deacon Balian who sang a few national songs while attendees participated in his renditions.

Church Parish Council chairman, Mr. Vartan Nazerian than spoke and thanked the Ladies’ Auxiliary for the wonderful meal and their unwavering support for the Parish Council. He also underlined the importance of such events and promised that the council will strive to organize many such events to bring California’s lower desert Armenian community together.

The event was closed with Pastor Gevorkian’s benediction and prayer.