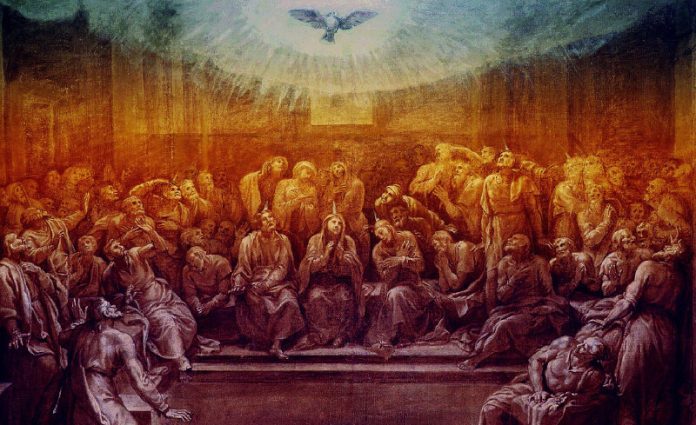 The Advent of The Holy Spirit

The Holy Spirit came on the Disciples as a personal strength which implied a permanent effect on their souls. The Holy Spirit enlightened the mind, directed the heart, strengthened the will, faded away the doubts, inspired brevity, and gave ability to be effective.

The miraculous event was the greatest following the Resurrection and the Ascension of Christ on the 50th day of Easter. It was also on the 10th day of the Ascension when the Holy Spirit descended in the Upper Room in Jerusalem where the disciples were gathered “all of them together with some hundred and twenty followers.” The Advent of the Holy Spirit coincidedwith the traditional Feast of Pentecost, meaning in Greek the 50th day that commemorated the day Prophet Moses received the Ten Commandments in Sinai 50 days after the people of Israel left Egypt.

In the Upper Room, as described in the Acts of the Apostles, all of a sudden tongues of flames descended individually upon the disciples who received strength and knowledge. They were no longer disciples; now they were Apostles to go, as they were called by Jesus to be Hisdisciples in the first place. This time they were charged “to go henceforth,” inspired by the Holy Spirit, the Divine Power.

Who is the Holy Spirit?

He is the Third Person of the Holy Trinity, the Breath of God who was effective in the Creation of the world as we read in the opening verse of the Holy Bible: “The Spirit of God was around at the creation of the world.” The Holy Spirit was gradually acknowledged as the “Wisdom of God” and the “Power of God,” as preached by St. Paul the Apostle. Whenever God revealed himself through the Prophets, and later through the Apostles, the Holy Spirit was there.

At the Birth of Jesus, Mary was conceived by the Holy Spirit. Jesus was confirmed as the Son of God by the Heavenly Father, when the Holy Spirit came upon Him in the form of a dove while being baptized by John the Baptist. The Church soon recognized the Holy Spirit as “the source of life, and the giver of divine gifts,” defined also as the “Grace of God” chanted in our baptismal hymn. Those gifts were distributed indiscriminately to those who believed in “the Breath of God”  by which the First Armenian Bible, and the only one, was identified as “The Book of the Breath of God” (Asdvadzashoonch Matyan).  The Church there-after repeated the Baptism of Jesus in the Jordan by John the Baptist as the “Sacrament of Baptism for those who were born again by the Spirit.”

The Holy Spirit acquired two additional attributes through the administration of the Seven Sacraments by the Church: “In communion with,” and as the “life-giving breath of Christ”. The Church of Christ became His Body permeated by the Holy Spirit, an institution that went across the world empowered with the same Spirit of God, the same way as His earthly body was walking among His followers, preaching and healing, teaching and feeding. Thus, the human Body of Christ and His Church on earth became identical and the same, in nature and in action.

Jesus predicted the Advent of the Holy Spirit saying, “The Father will send the Holy Spirit, the Comforter, in my name which will remind you and teach you all the things I have spoken to you.” Actually, fifty days after the Resurrection it happened exactly what Jesus had predicted, when on the Feast of Pentecost, the Breath of God descended with a loud voice and fiery tongues in the Upper Room and filled the place where the disciples and some 120 believers were praying and expecting the Advent of the Holy Spirit. “They all” were enlightened and spoke different languages, ready to spread the Good News all over the world according to the last commandment Jesus gave to the Eleven Disciples.

The Armenian Churchkept the original doctrine “from the Father” as initiated in the Gospel, realizing too well the coordinating statement of Jesus “in my name”. The Armenian Church hymn of the Feast of Pentecost says it all. We sing “ee Harasharj”, meaning “moved by the Father,” that is the Holy Spirit proceeded from the Father (Har=Hyre), and not in the misspelled way “ee yarasharj,” which means, “the ever moving,” that has no reference whatsoever with the Procession of the Holy Spirit. Regretfully, the mistake persists in the Holy Etchmiadzin official Calendar for the last ten years, not reading the word correctly. I have reminded the error at the time, but to no avail.

There were also Jews from different colonies who had come for the Feast. They are known in the Acts of the Apostles as “Men filled with awe,” whose provenance is geographically and accurately mentioned by the Evangelist Luke, also the author of the Acts of the Apostles. The names of the districts and cities are lined up one by one, 12 of them, from Parthia to Mesopotamia, from Judaea to Cappadocia, from Pontus to the regional towns in Asia Minor, on the way to Palestine.

“Armenia” and Not “Judaea”

The locations of those colonies are accurately recorded, except for Judaea which is mistakenly squeezed between Cappadocia and Mesopotamia. The country should read Hayastan (Armenia), and not Hreastan (Judaea), as corrected by two ancient Church Fathers Tertullian and St. Augustine. Later, Patriarch Malachia Ormanian         was the first to reveal the case in the Armenian Church in his voluminous Hamapatum, a comprehensive commentary on the Four Gospels, explaining that those Jews went to Jerusalem from Armenia, and not from Judaea where the Pentecost was actually taking place. Obviously, not two countries existed by the name of Judaea.

This made a significant difference knowing that Jews from Armenia went to Jerusalem also and “heard” the Armenian language,  as described in the Acts of the Apostles. The passage reads: “Those who came from far distances heard their own local languages uttered from the lips of the Apostles,” including, admittedly, the language of those who had gone from Armenia.