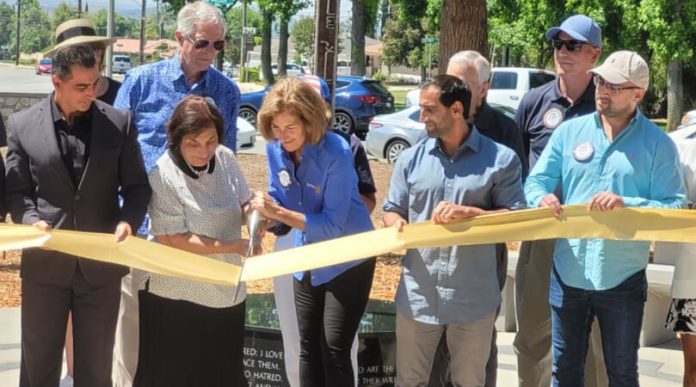 The ceremony began with Angela Amirian, a Mashdots College alumna, playing “Amazing Grace” and the traditional Armenian song “Kilikia” on the violin.  La Verne Rotarian and Master of Ceremonies, Debbie Deacy, welcomed the guests and Rev. Dr. Johnny Der-Yeghiayan, son of the late Dr. Garbis Der-Yeghiayan, opened the event with a prayer.  Dr. Garbis Der-Yeghiayan’s eldest son, James Der-Yeghiayan, followed with speaking about the life of his father. Sharon Johnson-May, President of the Rotary Club of La Verne, then described the impetus for and journey to build a memorial in Dr. Der-Yeghiayan’s honor.  La Verne City Mayor Tim Hepburn described a man whose life pursuing peace impacted both his local community and the world.

Note:  The memorial’s construction is approximately 90 percent funded, but additional funds are being raised to help complete the project.  As the La Verne Rotary President Sharon Johnson-May explained, the hope is that the memorial will last over one hundred years.  If there is any interest in donating , one can still do so on the GoFuneMe page www.GoFundMe.com/f/GarbisMemorial or by sending checks to the La Verne Rotary Foundation (Memo Line:  Garbis Memeorial) to PO Box 151, La Verne, California 91750.  All donations are tax-deductible.