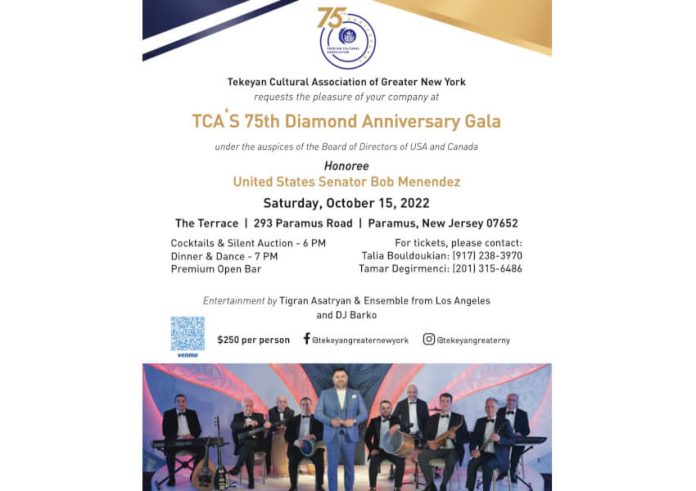 The Tekeyan Cultural Association (TCA) Greater New York Chapter is hosting a gala banquet on Saturday, October 15 commemorating the 75th anniversary of TCA worldwide. TCA is dedicated to advancing Armenian culture through its various centers and chapters, and the NY chapter’s event is held under the auspices of the Central Board of the TCA of the United States and Canada.

US Senator Bob Menendez will be honored at the banquet, while the well-known Armenian artist Tigran Asatryan and his band from Los Angeles will perform for the first time for the New York/New Jersey community that evening. DJ Barko will also contribute to the entertainment of guests.

The master of ceremonies is Diran Jebejian, a man who has spent the better part of his life serving the Armenian community through various organizations. An ordained deacon, he grew up in the Armenian Church, and has served on countless planning committees for the Eastern Diocese of the Armenian Church. He has previously served on the TCA Greater New York executive committee and performed with the TCA Mher Megerdchian Theatrical Group. Currently he serves as a co-host for the Armenian Radio Hour of New Jersey and recently was elected to St. Nersess Seminary’s board of directors.

Diran holds a master’s degree in Public Administration, owns an event photography business, and serves as Chief of Emergency Medical Services for the Borough of Fort Lee, NJ. He believes strongly in the TCA mission to promote cultural, spiritual, and educational ties with our homeland, irrespective of political and ideological barriers.

Honoree Senator Menendez has championed Armenian causes for decades, including justice for the Armenian Genocide and US support for Armenia and Artsakh. The son of Cuban immigrants, he entered politics in Union City, NJ, in opposition to local corruption. He obtained his law degree from Rutgers University, and worked his way up the ladder of government, winning elections as mayor, state legislator, congressman, and then, in 2006, US senator.

As senator, he became chairman of the important Senate Foreign Relations Committee, and was able to block biased candidates who potentially would have been hostile to Armenians from ambassadorial positions. He consistently has worked to constrict US assistance to Azerbaijan and enforce Section 907 of the Freedom Support Act of 1992. One of his important accomplishments was help pass a bill which got the US to formally reaffirm its recognition of the Armenian Genocide and its support of Armenian Genocide education.

He has of course played a prominent role on varied US foreign policy issues. He serves on the Senate Banking, Housing and Urban Affairs Committee, where he champions increased consumer protection and corporate accountability, fairness in lending, affordable housing, and comprehensive approaches to community revitalization. He served as Chairman of the Banking Subcommittee on Housing, Transportation and Community Development where he fought for smart growth, jobs for the 21st Century and updating our aging transportation system. As a senior member of the Senate Finance Committee, he has sponsored legislation increasing access to health care, advocated for fairness in the tax code to help middle class families get college educations and be able to retire, and has pushed for trade initiatives to ensure America’s global competitiveness.

The gala dinner, taking place at the Terrace in Paramus, N.J. (293 Paramus Road), will include a sophisticated silent auction pieces as well as a variety of raffle items. For sponsorships or tickets, please contact Talia Bouldoukian (rsvptaliab@gmail.com or 917 238-3970) or Tamar Degirmenci (tiiaa20@aol.com, or 201 315-6486).