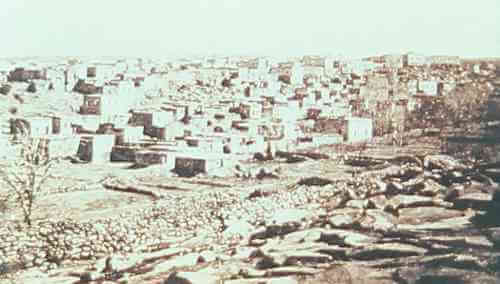 My Father, His Mother and Two Sisters

My parents were blessed with six children, three boys and three girls born in Cairo. The three brothers were always with their father who seldom reflected quietly on the tragic years he, his mother, and two sisters went through during the deportation from July 1915 to May 1922. We have mixed memories from his scant, cautious and careful memoirs, sad and sometimes courageous that he occasionally related to his three young boys avoiding details that might confuse us negatively. He has always been optimistic looking forward for better days. That is how they survived, except for their mother, and made their lives safer following those most difficult seven years in exile.

In July 1915 my father Yeghia, his mother Serbouhi, and two sisters Vartouhi and Annitza, were rounded up overnight to leave their paternal home in Everek, near Kaiseri, and join the caravan for uncertain destination. Two months earlier, their father Hagop Arzoumanian and his younger son Taniel were taken to Kaiseri and imprisoned for no reason. The Turks were suspicious that Hagop, my grandfather, being an officer serving all his life as a City Council member and Mayor, “was familiar with many things from the inside.” Taniel, in poor health, died in the prison, while his father was released three years later following the 1918 armistice. Going back to Everek he finds no one from his family.

All three, mother, son and two daughters arrived in Cilicia with the help of a donkey, mother 40 years old, sitting on the back of the donkey, sisters 10 and 8, in the saddle’s two hampers evenly hanging on its sides, and the son, my father age 18 on foot. They were welcomed by the Armenians of Cilicia in the city of Adana where the exiled had just returned temporarily to restore their lives left behind. It turned out to be entirely different when Cilicia was treacherously surrendered to the Kemalist Turks, and evacuated again, this time forever. The safest destination was Aleppo, Syria, where they all migrated by thousands.

While in Cilicia, my father used to tell us, there was hope for them to stay, and “I even opened my tailor’s shop, joined the newly formed Ramgavar ADL political party and settled at least for one year,” showing us his membership ID card, presently kept with my brother Dr. Haroutiun. During that same year the Armenians felt politically safe, as Catholicos Sahak Khabayan of Cilicia, exiled from Sis had settled in Adana with his two Bishops Bedros Sarajian and Yeghishe Garoyian running the affairs of the Catholicosate of Sis, capital of Cilicia. All hopes however lasted for a short period of time. Most recently I was totally surprised to notice an old group picture printed in the newspaper representing the local central board of the ADL party members. There I saw my father Yeghia, the youngest among all, seated on the floor with another member, while the seniors were standing behind, some twenty altogether.

There was also days when the deportees were welcomed by the local Turks in Cilicia. The Turk youth used to converse and amused with my father while working in his tailor’s shop, naming him “Ahmed.” There were designated days for bread distribution, as he recalled, and my father entered the line to receive his share. Those knowing him used to tell him “enter the line one more time.” France was reigning over Cilicia, and Armenian Legionnaires volunteered to serve in the French army, hoping France would keep up with his promise to return Cilicia to the Armenians. That never happened despite the Battle of Arara in Palestine where France came out victorious with the participation of the Armenians who lost 23 Legionnaires in 1918.

Before arriving in Aleppo my grandmother Serbouhi died in the hands of her children while in the town of Rakka at her tender age of 40. While in Aleppo my father remembers seeing the Blessing of the Holy Oil (Miuron) by Catholicos Sahak Khabayan in the Cathedral of the Diocese, a rare event as it was, where a decade later Catholicos Coadjutor Papken Guleserian of Cilicia was elected and consecrated. Following the caravans they had to make a decision moving either toward Deir Zor, southern Syria, or Beirut, Lebanon. The direction taken was providential, since the ultimate destination my father had in mind was Cairo, Egypt where his uncle and the family were residing before WWI. Those who walked in the other direction were all massacred in the notorious town of Deir Zor.

Brother and two sisters lived in Jell-el dib, near Antelias, Lebanon, the site of the future Catholicosate of Cilicia. They stayed for one year and my father, as he told us, was able to open his shop, safe until they were able to travel to Egypt. He recalled the site of Antelias being an orphanage before it was used by the Holy See of Cilicia and purchased in 1938 through the efforts of Archbishop Bedros Sarajian, Vicar General of the Catholicosate, who also built the impressive St. Gregory the Illuminator Cathedral two years later.

Following seven years of uncertain and deadly marches from one place to another, brother and two sisters arrived in Cairo in 1922, and were welcomed by their uncle Sarkis Arzoumanian and the family. Soon my father rented a house and opened his tailor’s shop while the girls attended the Kaloustian Elementary School until they were ready to migrate to the United States where their future husbands were expecting them some five years later.

In the meantime my grandfather Hagop Arzoumanian left Everek and paid a pilgrim’s visit to Jerusalem on his way to Cairo to join his children. He donated to Patriarch Yeghishe Tourian two parchment volumes as his gift and received His Beatitude the Patriarch’s letter of blessings and appreciation. I have in my possession the letter as a historic document. Joining his family in Cairo he lived a long life receiving the good care of his son, daughter-in-law and six grandchildren. As a 10 year old I remember my grandfather very well; so do my brothers and our elder sister. Crossing all trying bridges, from Everek to Caesarea, from Jerusalem to Cairo he still had the determination to write and publish in 1935 his book entitled “History of Everek” an eye-witness account that served as a fundamental source for future historians. He died in 1944.

Today is April 24, 2021 as I write this tribute. We were privileged to receive the historic endorsement of President Joe Biden of the United States that came as a source of inspiration shaking the entire world against the many mishaps of the recent months that shook our homeland. The Republic of Armenia and Artsakh, and the Armenians all over certainly needed the turn of this page in our history as an international reflection.

I take as my turn to write this epic on behalf of my father and his family designating it as a Holy Revenge with the rise of multiplied families among the three survivors whose children, grandchildren and great-grandchildren comprise an army of over one hundred living happily under the hospitable skies of North America. This is truly an EPIC.