Local News: Antony Blinken expresses readiness of the USA to assist Armenia in reform implementation in phone talk with Pashinyan 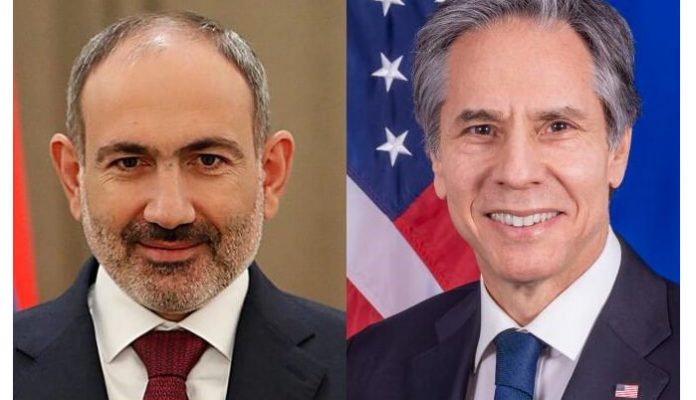 Caretaker Prime Minister of Armenia Nikol Pashinyan held a phone conversation with U.S. Secretary of State Antony Blinken at the initiative of the latter.

As ARMENPRESS was informed from the Office of the Prime Minister, the American side congratulated Nikol Pashinyan on the victory of the ‘’Civil Contract’’ Party in the elections, emphasizing the consistent steps taken by the Armenian Government in the recent years aimed at ensuring the democratic achievements of Armenia. In this context the U.S. Secretary of State highly assessed the efforts made by Nikol Pashinyan aimed at the easing of pre-election tensions and establishing civilized relations with the opposition.

Antony Blinken emphasized the importance of the reform agenda implemented by the Government of Armenia, particularly, in the spheres of fight against corruption and justice and added that the USA is ready to continue assistance in this direction.

At the same time he noted that the relations between the two countries is based on democratic values.

Caretaker Prime Minister Nikol Pashinyan thanked for acknowledging Armenia’s achievements in the direction of democratic reforms. He praised the United States» continuous support to strengthening democratic institutions and the rule of law in Armenia, as well as for launching a police patrol in Yerevan. Pashinyan noted that the patrol service will expand throughout the country in the future and hoped that the U.S. assistance will give an opportunity to fulfill that process.

The caretaker Prime Minister highly assessed the efforts of the Assistant Secretary Philip Reeker for the return of the Armenian POWs from Azerbaijan a month ago.

The return of POWs and the withdrawal of the Azerbaijani armed forces from the sovereign territory of Armenia were highlighted as key factors for establishment of peace in the region.

The U.S. Secretary of State assured that the USA will continue making efforts for ensuring the return of all the POWs. Referring to Nagorno Karabakh conflict, the Secretary of State strongly highlighted the restoration of the activities of the OSCE Minsk Group Co-chairs, emphasizing the necessity of developing a clear agenda for the peace process, which will give an opportunity for finding a sustainable ad lasting settlement to the conflict.

In this context, Nikol Pashinyan also stressed that the conflict is not settled and needs a comprehensive solution, which can be achieved only within the framework of the Minsk Group Co-chairs» format.

The American side agreed with the Prime Minister’s observation that the status quo can not be stable, and the Minsk Group Co-chairs need a clear agenda that will contribute to the success of the talks.