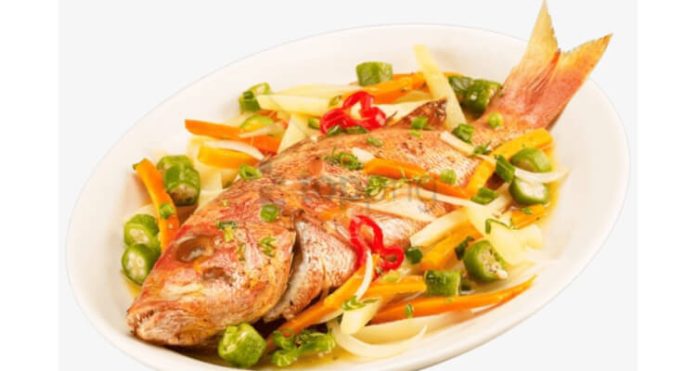 Cerebrovascular disease, or vascular brain disease, refers to multiple conditions that affect the blood vessels and blood circulation in the brain, such as stroke and vascular malformation.

In addition to causing physical disability, cerebrovascular diseases can result in the development and progression of cognitive impairment and dementia.

Moreover, health experts also associate subclinical cerebrovascular damage — that is, brain abnormalities observed in the early stages of the cerebrovascular disease before its symptoms become evident — with an increased risk of dementia.

For instance, there is a relation between higher intake of fish and a lower risk of stroke. Fish are an excellent source of omega-3 polyunsaturated fatty acids, which may mediate these benefits on cerebrovascular health.

However, the evidence that fish consumption reduces vascular brain damage before the onset of the cerebrovascular disease is mixed.

The study reports an association between eating fish two or more times per week and lower levels of brain abnormalities related to vascular brain damage, especially in individuals under the age of 75 years.

The study’s senior author, Dr. Cecilia Samieri, a senior researcher at the University of Bordeaux in France, explains: “Our results are exciting because they show something as simple as eating two or more servings of fish each week is associated with fewer brain lesions and other markers of vascular brain damage, long before obvious signs of dementia appear. However, eating that much fish did not have a protective effect in people 75 years of age and older.”

The study appears in the journal Neurology.

The present study analyzed data collected between March 1999 and March 2001 as part of the Three-City Study, which aims to understand the relationship between vascular diseases and dementia in people aged 65 years and older.

The analysis involved 1,623 people with an average age of 72.3 years and residing in Dijon, France. Individuals were excluded from the study if they had a dementia diagnosis, a history of stroke, or hospitalization for cardiovascular diseases.

They analyzed the MRI scans for the presence of three markers associated with subclinical cerebrovascular damage:

White matter consists of nerve fibers, or axons, that relay messages between brain regions. Cerebrovascular disease can result in nerve fiber degeneration and cause damage to the myelin sheath that surrounds the nerve fibers. This leads to white matter abnormalities.

Infarcts are regions of dead tissue resulting from inadequate blood supply. This is often due to a blood clot in a blood vessel.

At inclusion, the researchers assessed the participants’ weekly intake of various food items, including meat, fish, fruits and vegetables, legumes, and cereals, with the help of a brief questionnaire.

The participants consuming fish two or more times per week had lower combined levels of cerebrovascular disease markers than those who consumed fish less frequently.

Moreover, the strength of the association between lower cerebrovascular disease marker levels and frequency of fish intake was influenced by age. This association was strongest in younger participants aged 65–69 years, but it was not statistically significant in individuals aged over 75 years.

To further contextualize the results, the researchers compared the impact of high blood pressure on cerebrovascular disease markers with the frequency of fish intake.

In the participants aged 65–69 years, consuming fish twice per week had a similar effect on cerebrovascular disease marker levels as high blood pressure, but in the opposite direction.

Moreover, the magnitude of the effect of consuming fish four or more times per week on levels of vascular brain damage markers was twice that of high blood pressure.

Dr. Jyrki Virtanen, an associate professor at the University of Eastern Finland, who was not involved in the study, spoke with Medical News Today.

He said, “This is an interesting and potentially important study, as it showed that fish intake can be beneficial for the brain and that it is possible to detect benefits even before overt signs or symptoms appear.”

“An interesting finding was also that the beneficial association was mainly observed among the younger participants,” he explained. “This may mean that for getting the benefits of fish intake on brain health, one should regularly consume fish in younger ages.”

The strengths of the study include the use of high-resolution MRI scans to evaluate three different markers and derive a more comprehensive measure of overall cerebrovascular health.

The researchers also analyzed the data after controlling for numerous variables, such as lifestyle choices, education levels, age, and more, which could have impacted the analysis.

“However,” he continued, “in nutrition research, well-conducted observational studies can provide good evidence for diet-disease relationships.”

The authors also note that they administered the food frequency questionnaire only once during the study and that the survey may not represent long-term dietary patterns.

Magda Gamba, a nutritionist and doctorate researcher at the Institute of Social and Preventive Medicine at the University of Bern in Switzerland, who was not involved in the study, told MNT:

“This is an observational study associating fish intake measured at only one point in time with image indicators of cardiovascular disease burden. This means that we cannot make any direct conclusions on fish as a food that prevents brain damage.”

“More studies are warranted in order to really establish if fish is the real determinant of the observed MRI markers results in this study,” Gamba concluded.

“More research is needed to help us understand the mechanism of how eating fish may preserve brain vascular health,” says senior author Dr. Samieri, “because diet is a factor people can modify to possibly decrease their risk of cognitive decline and even dementia later in life.”

Gamba similarly noted, “This article contributes to the knowledge about the relationship existing between fish intake and brain health; younger adults seem to benefit more, but in general, a healthy diet as a part of a healthy lifestyle is recommended for all persons to keep the brain healthy and functional regardless of their age.”