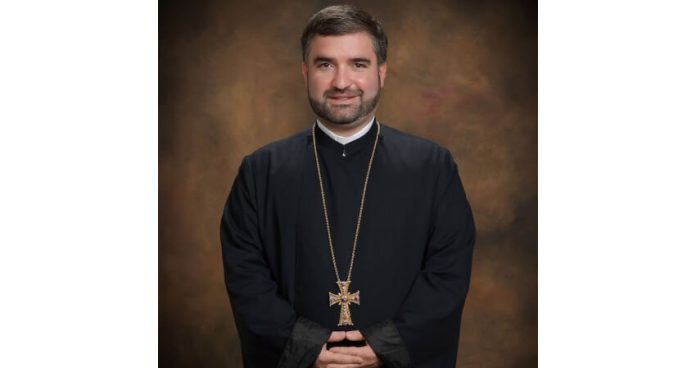 On May 6, 2022, at the 120th Diocesan General Assembly held at St. Vartan Cathedral in New York City,  Very Rev. Fr. Mesrop Parsamyan was elected Primate of the Eastern Diocese of the Armenian Church of America. The other two candidates running for the office of primate were Bishop Daniel Findikyan and Very Reverend Fr. Mamigon Kiledjian.

Fr. Mesrop Parsamyan has a very distinguished background as a scholar, pastor, and church leader. A native of Armenia, born in Yerevan, on May 15, 1981, to  Mihran and Manya Parsamyan, he graduated from the local public school. From 1997 – 2003 he studied and graduated with honors from the Vaskenian and the Gevorkian Theological Seminaries. He is a member of the Brotherhood of Holy Etchmiadzin. He was ordained to the priesthood in 2003, and was staff-bearer to His Holiness Karekin II, Catholicos of All Armenians, . He subsequently served as professor of Christian Ethics at Etchmiadzin’s Gevorkian Theological Seminary, and also as deputy-chancellor of the Mother See.

In 2015 Fr. Mesrop Parsamyan came to the United States and served as the pastor at Holy Virgin Mary and Shoghagat Armenian Church in Belleville, IL. until 2017

From 2017-2018 he was appointed Director of Ministries at the Eastern Diocese of the Armenian Church of America.

From 2019 – 2021 Fr. Mesrop returned to Armenia and served as the Dean of Gevorkian Theological Seminary, Etchmiadzin, Armenia.

In 2021 he returned to the United States and currently he is the Director of Ministries at the Eastern Diocese of the Armenian Church of America, a position he assumed in October 2017.

Many have come to know him through his inspirational weekly electronic publication and  “iLooys.com”

There is no greater responsibility, advantage and benefit in life than the education of the next generation.
If the priest is called to lift up the souls of the people, then he, first of all, must have already ascended to the spiritual height.

The Link Between Giving Up Late Dinners And Life Expectancy