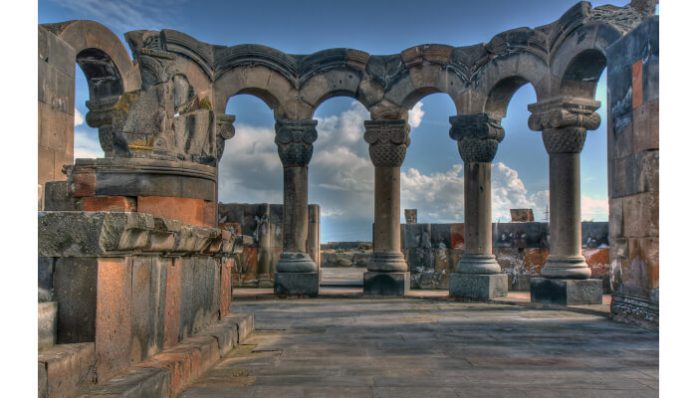 The Cathedral Of Zevartnots Seventh Century Unique Monument Of Vagharshapat

Fortunately the excavations of the ruins of Zevartnots Cathedral, its dimensions, the style,   and the characteristic details offered so much data that today we can say we know the church entirely with all details like it was originally built at that time.

Fifty years ago  in 1971  the Academy of Sciences of Yerevan published a valuable volume by Stephan Mnatsakanian, titled “Zevartnots and the Same-style Monuments,” dedicated, now in ruins, to St. Gregory the illuminator Cathedral, better known as the Zevartnots Church,  built by Catholicos Nersess III Ishkhantsi the Builder, who had his pontifical headquarters in Dvin, capital of Armenia.  Mostly known by our historians as St. Gregory Cathedral, it was named only once by the 7th century eye-witness historian Bishop Sebeos Bagratuni as the “Cathedral of Zevartnots,” meaning “Dedicated to the Angels”.  The church was built in 659 and lived 300 years before ruined by the 10th century earthquake.

Fallen in ruins 1000 years ago, this unique Cathedral can speak for itself through each stone, sculpture and column architecturally “reconstructed” on the site by the talented architect Toros Toramanian who, following his tedious studies supported by descriptions provided by our contemporary historians, redesigned the round based three-story high Cathedral in its full stature.  We now have the ruins, and next to them the true design as it was built then. Toramanian visited the site of the Zevartnots Cathedral in 1905 and with the blessings of Catholicos of All Armenians Mkrtich I Khrimian Hairig concluded his final architectural designs and presented them to the Academy of the Armenian arts and architecture. Today and always Toramanian’s “reconstruction” proves final.

Mnatsakanian’s 260-page monumental book contains additional 40 pages of pictures   of ALL pieces available to sustain the church’s original style after Toramanian’s design. He speaks highly of the architect saying, “Fortunately in 1904 architect Toros Toramanian arrived in Etchmiadzin and started the excavations on the site. He was able to save each stone from disappearance after studying the project diligently, publishing the first article with authority     in 1905 on this famous monument.”

The photos at the end of this instructive volume by Mnatsakanian are placed in succession, starting from the ground plan and the fallen tones, the columns’ capitals with sculptured eagle on each, together witnessing the “life” of Zevartnots Church for the last     1360 years. On one of my visits to Holy Etchmiadzin, I asked His Holiness Vasken I Catholicos    of All Armenians of blessed memory if one day this church also could be built like the other fallen churches after Toramanian’s reconstruction. His Holiness said,“The ruins of Zevartnots stand irreplaceable on their original site as they are preserved, even though  without being built. They are as we have them and will be preserved as they are.”

None of our historic monuments is described with great amazement and highest praises by our medieval Armenian historians as the Church of Zevartnots, mostly named as St. Gregory the Illuminator Church. Those evidences verify the Church’s existence up to the first quarter of the 10th century. The contemporary (7th c.) historian Bishop Sebeos states that “It was built high and amazingly superb, worthy to the glory of God.” The tenth centuryhistorian Catholicos John V Draskhanakertsi of Armenia describes it as “the all-glorious large church with variety of structures.”  The same qualities are given byhistorians Stephan Taronetsi Asoghik and Mkhitar Ayrivanetsi, confirming “the church as zarmatsoutsichn tiezerats” (that amazes the whole world)  built by Cathoicos Nersess III (641-661).

Based on available evidences Mnatsakanian in his comprehensive book qualifies the Church as “the monument which offered to the future generations the soaring accomplish-ments of the talented architect, his bold concepts with its magnificent details.”  Before Toramanian’s arrival, while Khachik Vartabed Tatian was supervising the early excavations of the Cathedral, an inscription was discovered on one of the stones reading, “this was built by Nersess, remember him,” deciphered by Bishop Mesrob Ter Movsessian, a leading scholar at the turn of the century. In addition, on one of the pillars was inscribed in Greek the name “by Nersess Catholicos” leaving no doubt that they referred to Catholicos Nersess III from the     District of Tayk, also known as Nersess the Builder.

Architect Toros Toramanian has discovered yet another eye-catching sculpture on one of the arches with a human figure, wearing the hood of a priest, spade in his one hand and a mattock in the other, written on his head “JOHANNA” who undoubtedly, he says, was the name of the genius architect of Zevartnots Church.

As for the location of the Church, our contemporary historian Bishop Sebeos clearly identifies the cross road where the church was built, saying in his famous book of “History        of Heraclius,”  that “Nersess built the church of Zevartnots on the road where, they say, King Terdat III welcomed St. Gregory.”  We know from our past history that after the adoption of Christianity as a national religion of Armenia in 301 AD, Gregory Parthev was sent to Cappadocia to be ordained Bishop and return as the first Bishop of Armenia. Upon his return King Terdat III welcomed him with great celebrations on the road in Vagharshapat where Zevartnots Church was built.

Catholicos Nersess III led the Armenian Church during turbulent times, from 641-661. The Arabs on the one hand invaded Armenia in 643, and the Byzantine Empire’s heavy hand increased pressures on doctrinal grounds on the other, causing serious danger for Armenia. The Greek Emperor Constantine II showed even meaner intentions by personally invading Dvin, capital of Armenia in 653, where the Catholicos had established his headquarters, demanding the imposition of the Chalcedonian doctrine of 451 AD on the Armenian Church. He had all the intentions to submit the Armenian Church to Greek Orthodoxy.

In the Armenian Cathedral at Dvin, not to confuse with the Church of Zevartnots which was completed later in 659, the Emperor demanded in his presence and in attendance of Catholicos Nersess, all the Armenian bishops and the faithful, Greek liturgy be performed by a Greek priest and all receive the Holy Communion, seemingly subjecting the Armenian Church  to the Greek Orthodoxy. The historian Sebeos reports that following the Greek Liturgy all received the Communion forcefully, except for one bishop, no name given, but admittedly it was himself Bishop Sebeos of the Bagratuni Dynasty, as suggested by our distinguished church historian Patriarch Malachia Ormanian.

The Greeks even tried to label the newly built Zevartnots Church as an Orthodox oriented church under the Byzantine Empire, considering the Armenian Prince Theodoros Rshtouni’s inclination towards them as a favorable position who, from political standpoint did not even care and failed to see any difference between the two churches. This however meant very little considering our historians’ witnesses defending the “magnificent” Church as truly an independent Armenian Church, discarding everything else, political or otherwise, as non-binding and insignificant. The ruins as of today speak for themselves.

Intolerance persisted, and both the Emperor Constantine and Prince Theodoros instigated animosity against Catholicos Nersess III who was exiled by the orders of the  Emperor to his home district of Tayk for six years, as we read the statement of historian Catholicos    John V: “Bishop Anastas was appointed vicar to keep the Holy See as the overseer of the wonderful Church by the orders of Nersess, while he was persecuted in the district of Tayk.” Following his exile Nersess III returned Dvin and consecrated the already completed Church of Zevartnots in 659, as reported by Sebeos: “Returning to his Seat Nersess hastened to finish    the construction of the church which he built on the main road of the city of Vagharshapat.”

Catholicos Nersess III passed away in 661, and his vicar succeeded him as Catholicos Anastas I Akorretsi. Sebeos concludes his account giving final tribute to the late Catholicos Nersess “whose body was laid to rest in the northern side of the glorious church which he himself built.”