H. H. Vasken I of Blessed Memory Catholicos of All Armenians The Distinguished Pontiff in History 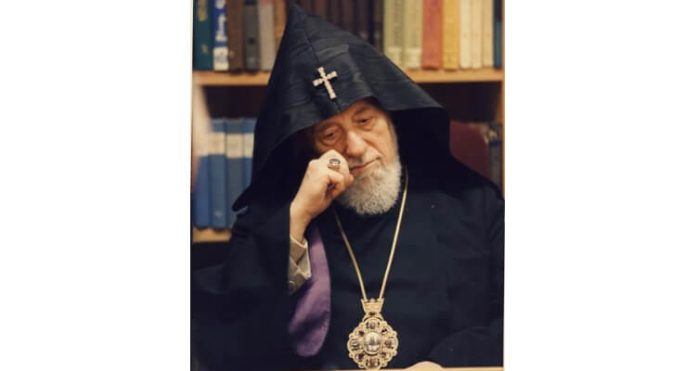 His seasoned personality and high diplomacy always impressed the leaders

of both the Soviet Union and the Armenian Republic.

Over a quarter of a century has passed since the Armenian Church and nation lost on August 18, 1994 a most venerable Pontiff, His Holiness Vasken I Catholicos of All Armenians, leaving behind a wealthy and unprecedented legacy. His record tenure, the longest among his predecessors of all times, Vasken I, the youngest among all, led the Armenian Church for 39 years with national and international, spiritual and educational remarkable achievements, including his equally unprecedented ten Pontifical Journeys abroad. Vasken I, born and raised in Bucharest, Romania, was consecrated a diocesan bishop for his native diocese in 1951, soon followed with his election and consecration as the Supreme Patriarch and Catholicos of All Armenians four years later in 1955 at age 47. Ever since his demise the Venerable Catholicos is considered unique by his flock both in the homeland and abroad.

Barely six months after his enthronement, Vasken I received an invitation in 1956 to visit the Catholicosate of the Great House of Cilicia for the election of the local Catholicos in Antelias, Lebanon, which remained vacant since the passing of Catholicos Karekin I Hovsepiants in 1952.

Arriving the first week in February 1956, with an entourage of bishops from Europe and the Holy See, he tried to relieve the existing tense situation among the parties and the brotherhood. Other bishops arrived in addition to the local bishops and they all met several times under the presidency of His Holiness, including the Patriarch of Constantinople Karekin Khachadourian and the Locum Tenens of the Jerusalem Patriarchate Yeghishe Derderian, to clarify the condition for a successful election. Unfortunately all efforts were unable to create the needed peace, and the election took place unilaterally after Vasken I Catholicos of All Armenians had left Lebanon for Cairo where the first Episcopal Convocation took place as planned by His Holiness. The original site of the Convocation was Jerusalem, but due to political Arab-Israeli conflict the meeting took place in Cairo, Egypt at the diocesan headqurters.

On May 12, 1956 His Holiness Vasken I, just a few months after  his election, paid an official visit to Kremlin and met with the Prime Minister of the Soviet Union Nikola Bulganin. The meeting, in the presence of both the Soviet and Armenian Ministers of Religious Affairs Boliansky and Grigorian, was highly diplomatic and proved very favorable for the Armenian Church at a most delicate time, as His Holiness presented seven urgent requests regarding the immediate needs of Holy Etchmiadzin. Upon his return to the Mother See, at the Cathedral during Sunday liturgy on the feast of Pentecost, the Catholicos of All Armenians reported on the well-received meeting and the productive outcome.

The Catholicos had mentioned in his report that the leader of the Soviet Union had read the written requests carefully, “giving them his official approval for each,” even though we were unable to identify those seven requests anywhere in a written form, cleverly, I think, avoiding unnecessary reaction set as an “example” for one or the other Republics to follow. The most important of the seven requests soon became very conspicuous, namely, the return of the confiscated and abused Veharan, the Pontifical Palace and the residence of the Catholicos. In fact the impressive Palace built in 1912 was returned the next year in 1957, and was totally renovated, ready for the National-Ecclesiastical Assembly of 1962.

During the four decades of his pontificate, Catholicos Vasken I formally established the following seven Armenian Church dioceses outside Armenia, as he periodically traveled to those remote countries: Australia and the Far East, Brazil, Uruguay, Germany, Canada, Central Europe, and Switzerland. He also dedicated and consecrated the St. Vartan Cathedral in New York City, St. Hripsimeh church in Vienna, and St. Mary Magdalene church in Brussels. In Armenia and vicinity the Catholicos re-established local dioceses headed by the Diocese of Artsakh, and restored some of the ancient monasteries in the country with the cooperation of the Soviet Armenian authorities with funds provided by the faithful from abroad.

The Catholicos Blessed the Holy Miuron (Oil) six times, once every seven years as required for the distribution to all dioceses and individual churches for the anointing of church edifices, priests, and newly baptized children. Those blessings were prohibited during the harsh years of the Soviet system, and since 1926 no Blessing of Miuron had taken place in Holy Etchmiadzin. The Catholicos was in dire need of bishops as well for the dioceses both in Armenia and abroad. During his pontificate Vasken I consecrated 65 bishops as needed. Both the numbers of the Blessing of the Holy Oil and the ordination of the bishops were unprecedented in recent history.

Upon the invitation of His Holiness Pope Paul VI of Rome, the Catholicos of All Armenians visited the Vatican the first time, accompanied by both Armenian Patriarchs Yeghishe Derderian of Jerusalem and Shnork Kaloustian of Constantinople. Pontifical visitations to the Vatican repeated, as delegations from the Vatican visited Etchmiadzin on various occasions in return, such as on the Blessings of the Holy Miuron and other landmark anniversaries. The relationship with the Church of England was also very warm, as two Archbishops of Canterbury were invited to visit Armenia and Holy Etchmiadzin during his pontificate. In return the Catholicos was invited to visit England several times.

Papal visitations to Holy Etchmiadzin were realized later by Pope John Paul II in 2001, and Pope Francis in 2016 during the pontificate of the present Catholicos Karekin II. On April 22, 1994, just prior to the passing of the Catholicos in August, a delegation from the Vatican visited the ailing Catholicos Vasken I headed by Cardinal Sylvester who presented the Pontiff with the relics of Saints Thaddeus and Bartholomew, the first Apostles of Christ who introduced Christianity in Armenia. Vasken I passed away in August the same year.

Catholicos Vasken’s initiative was significant also in the active membership of the Armenian Church in the World Council of Churches in 1962. He was invited to Geneva to represent his ancient church with the celebration of a Pontifical Divine Liturgy, thus blessing the approval of the membership. Upon his return to the Holy See the Catholicos issued an Encyclical announcing the participation of the Armenian Church in the WCC as an active denomination. At the General Convocations of the Council, representatives traveled from Holy Etchmiadzin to represent the Armenian Apostolic Church.

The Armenians in the United States were especially touched where the Pontiff visited four times on four different occasions, the first in 1960 and the last on the aftermath of the tragic earthquake that shook northern Armenia in December, 1988. It was only a month after the disaster that Vasken I, this time tears in the eyes, arrived in New York and philanthropists from as far as Australia and Europe heeded the pontifical appeal to gather in St. Vartan Cathedral and organize relief on various levels. The tragedy needed immediate assistance in terms of housing, medications, and hospitalization, local and abroad, for the victims who had lost tens of thousands of their loved ones, including a large number of school children.

As the Armenian Church remembers with warm and filial affection His Holiness Vasken I on his 28th year of passing, in Armenia at the shores of Lake Sevan the new Vaskenian Seminary stands elegantly with young seminarians to witness the Catholicos’ permanent presence among them. A chapel and a full-size statue of the Venerable Catholicos Vasken at the entrance of the Seminary testify the gratitude of a nation and its church for all times.  The Seminary was the initiative of the present Catholicos His Holiness Karekin II who made the entire campus a reality from the days he was heading the Araratian Diocese of Yerevan. A lasting tribute indeed to a most distinguished Pontiff.